A cardigan, kind of 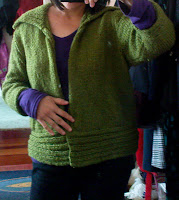 It's been several weeks since I finished the knitting portion of this cardigan, and I'm still no closer to getting around to adding buttons and blocking the thing.

So here are some pictures of how it looks so far.

The first photo shows you approximately how it will look buttoned up. 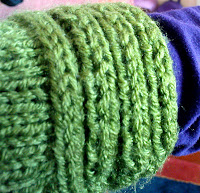 The second one is a close-up of the horizontal ribbing on one of the three-quarter length sleeves. 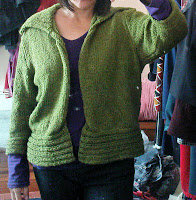 And the third one is how it looks  worn open. As you can see this garment is absolutely gagging for a blocking (and that's not being crude - it really does need a spray and a pinning out i.e. reshaping).

Also, it' much chunkier and less shaped than I expected. If you have a look at the picture that came with the pattern you'll see what I mean. I dunno what happened, I'm sure I was knitting at the right gauge and had picked the correct size to make. Maybe it's the yarn, because I think it was meant for droopier designs.

Anyway, it's good enough to wear and just the right weight for Spring (around these parts anyway).
Posted by Violet at Sunday, October 31, 2010 3 comments: Links to this post

Labels: a head full of knits, my own private project runway

Natio gentle day moisturiser - it was pretty runny, but I would have put up with that if it didn't irritate. Because then I could either find the night cream version or else used an oil underneath it. I had high hopes for this one because their "normal" skin moisturiser was almost, but not quite, non-irritating. Unfortunately the "gentle" one was not gentle enough.


Clarins Gentle Day Cream - it's expensive, but I hoped that would mean it would be genuinely gentle. Plus, I've used their foundation for years with no problem.  The tiny sample pot they gave me to take home was probably worth about $20 (the full size bottle - 60ml maybe? - cost $88)! Alas, I was surprised and disappointed that paying big bucks is no guarantee of skin comfort.


Tigerlily's Itch-be-gone - they sent me a miniscule sample of this after I emailed them, asking for samples suitable for my troublesome skin. I don't think this is meant to be used on the face, but there's not enough to properly test out on my body. Though what I did use, did feel nice enough. It's a locally made product by some guy who started out making soaps for his wife or something!

Skin Food - Another New Zealand product, and one that's found in all New World supermarkets at a super-affordable price. Which is why I've avoided it all this time. I found it extremely hard to believe that something costing only $11 for a nice big tube, could be a good one. I picked up this tube when I went to do the grocery shopping (the boy gets a bottle of wine, I get an experimental face grease...) and tried it when I got home today. I was a little perturbed by the lemony perfume (as I am by all perfumes). But 3 hours and 3 re-applications later (my skin drinks the stuff up like a fish in the desert), there is no sting, no flushing, no itchiness. If it was a little more moisturising, it'd be perfect. Still, it could all change tomorrow. So I shall wait and see...
Posted by Violet at Friday, October 29, 2010 2 comments: Links to this post

It's a hard road finding the right face moisturiser when you've got extremely sensitive skin, a low budget and want to avoid products tested on animals.

I tried Avene (called Redness-correcting light Daytime Moisturiser, or something similar), but that was no good. Plus, I suspect they do test on animals.

I tried Natio daytime moisturiser with SPF15, and while it did a good job of moisturising, it still irritated a little. They do have a sensitive skin product though, so I could go back and get a squirt of it to try out.

I also tried apricot kernel oil, because clevergirl uses it (albeit an organic version). That stuff was fine on my body but not on my face.

By now I was ready to give up and go back to Shiseido Benefience, which was perfect for me until I decided I couldn't afford it any more. Unfortunately, while checking out online beauty retailers to see if I could buy some at discount, I found out that Shiseido does test on animals. So boo hoo, even if we won the Lotto I would still have to continue my quest.

So the next products on my list to try are:

Actually, it's a contract. But it's a well-paid one, with plenty of potential for permanent employment later. Plus...it's a job!!

On the other hand, he has to start right away - literally, next Tuesday. So we'd had next to no time at all to sort out after school care for TLM. And he's going to be away sometimes because he'll be at sites all over the place.

He already has a list of things he's going to spend his pay on, hopefully one of those is a trip to the UK to visit his family because I've never actually met them in person. And taking time off for holidays is way harder when you're a contractor.

Labels: Back to work

When I got to the doctor's and showed her the left side of my head, she seemed very excited and fascinated by my condition. Obviously it's not something she's come across before. It was the ear that did it really. It was huge, florid and almost pulsating with not-quite-right-ness. She wanted to know all about it (maybe she'd been bored with a morning full of sniffles and sprained ankles - I dunno).

Anyway, a little TMI, so I'll gloss over the details. Suffice it so say that tonsils were examined and deemed healthy, so the infection was therefore of some other sort.

I got my prescription for a big bottle of antiobiotics, a note for my employers confirming I need another day off, and hope that some time tomorrow I will look and feel like myself again.

Actually, today I forgot I was sick on several occasions - I just have trouble turning my head, and my body temperature still goes a bit up and down. I even managed a couple of hours of work - checking and reply to emails and anything else I could manage from home.

And when I get back to work I shall be sure to clean my telephone very, very thoroughly.
Posted by Violet at Wednesday, October 20, 2010 5 comments: Links to this post

Overnight, just like that, I developed a tender lump on one side of my neck. The first morning, all my joints ached as well so I knew I was genuinely ill and I hadn't sleepwalked to a bar and got into a fight with the bouncer.

I spent most of that day huddled on the sofa with a duvet, a high temperature and Season 4 of the Gilmore girls.

Today I've been more conscious and my joints aren't aching any more. But my head still hurts and my neck still looks and feels like it's trying to hatch an avocado. Not only that, but it seems to be spreading further around my head - not the face, thank gawd, but if my left ear gets any more swollen it's going to explode. It already looks like it was transplanted from a larger animal - perhaps a rugby-playing elf with a lifelong alchol problem.

The boy's mum is a retired nurse, and she reckons it's tonsillitus. I always thought my tonsils were down the back of my throat, but then, I've always associated tonsils with ice cream so what do I know?
Posted by Violet at Tuesday, October 19, 2010 3 comments: Links to this post

For my birthday yesterday, the boy got me Season 1 of 30 Rock, which I love but keep missing on TV, and a copy of Steig Larsson's The Girl who Kicked the Hornet's Nest. For some reason he thought I was a Larsson fan, though in fact I've only ever watched the movie that was made from his first novel.

TLM picked out a very pretty Oriental-flavoured birthday card, and decorated the wrapping paper too, with some nice domestic scenes (am I worried that she's demonstrating such girlie behaviour? No, because it's balanced by her love for Ben 10 and Clone Wars).

The boy made me my favourite meal, butter lamb, which was followed by a very yummy berry-topped cake from Floridita's.

I was supposed to get the day off work, but as we've a plethora of Librans in the office I offered to work on my birthday and take today off instead.

And what a good choice! The weather was absolutely fantastic, compared to the exfoliating winds and bracing wintry throwback of yesterday. Needless to say, I had a load of washing up on the line as soon as my toast was in my belly.

While TLM was at school, the boy and I went into town and bimbled (apparently an English colloquialism for strolling around town with no particular aim in mind). We bought magazines and read them over lunch at Astoria. Just like the old days.

Also, I bought myself Bill Bryson's At Home. That guy could take a parliamentary transcript and turn it into something funny, informative and clever.

Then, just before we headed back home, we stopped off at Atticus, the boy's favourite shoe shop where I very nearly bought me some cherry Doc Martins.

Yes, I did wear Docs back in the 90's when they were last the hottest of the hot.
And I wonder whether they are the second most predictable fashion statement for 40-something women, after dyed red hair.
But I will wait until next Autumn before getting them anyway, because it's almost sandal season.
Posted by Violet at Wednesday, October 13, 2010 13 comments: Links to this post

I have mostly finished my green cardigan that was knit, unravelled and knit again (in a different pattern). I might even get around to posting a photo. There is still the buttons to choose and sew on, but that may not happen until next autumn now.

Not only that, but I have already knitted the back, front and about a quarter of the sleeves of another cardigan, this time a denim-y look originally designed to be knit in Rowan denim
(from a book called Denim People - much cooler than it sounds). Only I'm using an indigo acrylic because I can't afford to order couple of hundred bucks worth of cotton yarn just for what is, in effect, knit-doodling.

And, I'm about halfway through sewing a pair of trousers! Because, as we get into warmer weather, I have to forsake my skirt-or-dress + opaque tights combos, and instead rely on breezy yet leg-covering trousers for work. I'm making a test pair out of some dark stretch denim (and a Burda magazine 4-in-1 pattern) and I reckon they are going to be okay too.

Again, no pictures. Probably because I don't have a flash and my mirror still needs cleaning
Posted by Violet at Friday, October 08, 2010 4 comments: Links to this post

Labels: a head full of knits, my own private project runway

Maybe it's just a sub-conscious act of denial or something, but - in the last few years I keep forgetting how old I am.

I will be only a hop, skip and a jump from the big 5 -0.
Quite scary really, because I am heading right into breastscreening, wrinkle-checking, saggy-baggy territory.

The boy is a few years behind me though.

They do say that you're only as old as the one you feel...
Posted by Violet at Thursday, October 07, 2010 9 comments: Links to this post