TLM was due to start school the tomorrow, and we didn't have a stationery list yet for her new class. So while she lounged about in her nightie (it was 9.30am) I went to the school website to see whether I could find a list there.

I couldn't find it - but what did catch my eye was the humungous notice on their homepage announcing that school was starting TODAY (apparently a slight change in start date made some time after their late-2012 newsletter).

TLM may act a bit slothfully when she's on holiday, but I have been very impressed at her ability to get ready quickly when it's really important. Within minutes we were headed down the hill to school, her new backpack loaded with lunch, a drink and an Asterisk omnibus.

And - bonus - this was followed by about several hours of completely free time for me!!
Posted by Violet at Tuesday, January 29, 2013 3 comments: Links to this post

What I'm doing in my summer holidays 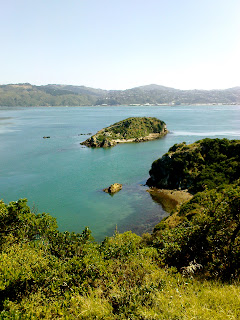 I took a week and a bit off before TLM goes back to school, hoping to catch some summer with her before we are all shut in until Easter.

It's just as well that we decided to go to Matiu/Somes Island on Tuesday, when I saw what a beautiful morning it was - because since then the weather's been rubbish. It's been warm, but muggy or rainy. Actually, almost exactly like the weather we "enjoyed" between Christmas and New Year - the last time I had a few days off work. I think the universe is trying to tell me something.

TLM still had fun though.

Yesterday we went to Petone for a bimble after dropping the boy off at work. We were about an hour early for the shops to open, so went for a walk along the Esplanade. TLM made the most of the sandy and shell-covered shore, and built a sandcastle before burying it again (for someone else to find, apparently). Then, the shops opened and TLM bought a cute little mouse (probably intended as a toy for a kitten) from the Cats Galore shop. The only shop I wanted to visit was the Holland Road Yarn Company, but it was inexplicably closed. It's probably just as well as I would have ended up buying lots of yarn I don't need.

Today we did lots of chores, but spent lots of time making pictures. I propped up my drawing board on some newspapers so that TLM could paint as though on an easel. I think we produced some great abstract works... Unfortunately laying down newspaper on the kitchen floor was not such a great idea. It stopped the paint from going on the floor, but now I have newsprint ink all over it!
Posted by Violet at Thursday, January 24, 2013 2 comments: Links to this post

I'll have to wait a few months before I can wear any of these, except for the beanie which is cotton. I just cannot stop knitting.

Posted by Violet at Saturday, January 12, 2013 2 comments: Links to this post

When the child's away, the parents will play - kind of

"You could go out of town! Have dinner up the coast!" my sister-in-law said, just before driving away with our only child for an impromptu sleep-over.

Ooh, yes. We certainly could. We don't get away much, with or without TLM (but especially without). The boy used to love it when we went to Rotorua for the weekend and stayed somewhere with geothermal pools.  And the weather forecast for the weekend was really promising.

I was so excited by the possibilities that I washed the dishes prematurely (rather than waiting till nightfall) - so that ants wouldn't get into them while we were away.

Well, we didn't go away in the end. I wanted to go for walks but the pale and sun-shy boy couldn't find his hat. So we went into town and went shopping for a new one. Don't get me wrong, I love shopping almost as much as the boy does - I found a new sunhat for me,  and the boy, after much searching, found a cap to fit his enormous (but handsome) head. He also found a new designer hoodie, two designer t-shirts and some Calvin Klein undies (much-needed, trust me). (Later, the boy told me that his highlight of the day was the look of horror on my face when the saleswoman told us how much all of the boy's new clothes cost. If you'd have been there, you would have looked like that too.)

Then we went for a drive an a walk at Percy Reserve, shopped for groceries and returned home for some relaxing reading in the sun before the boy cooked me a nice dinner (crispy duck with courgettes and capsicums, plus warm turkish bread).

Afterwards I read in the news that majors roads up the coast had been blocked off for roadworks, so I guess it's just as well we didn't decide to get out of town.