I finished that jacked I posted about a while back. 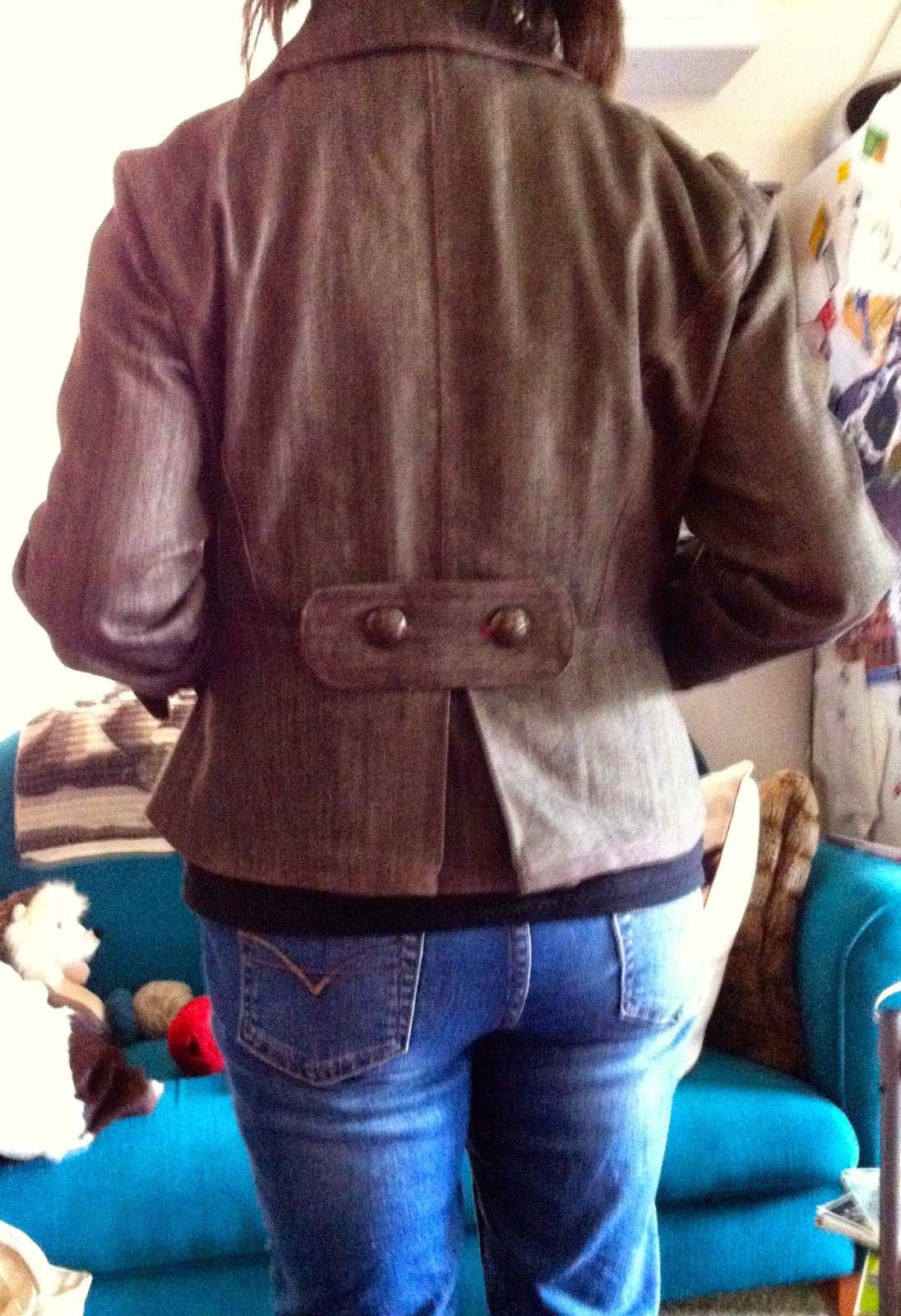 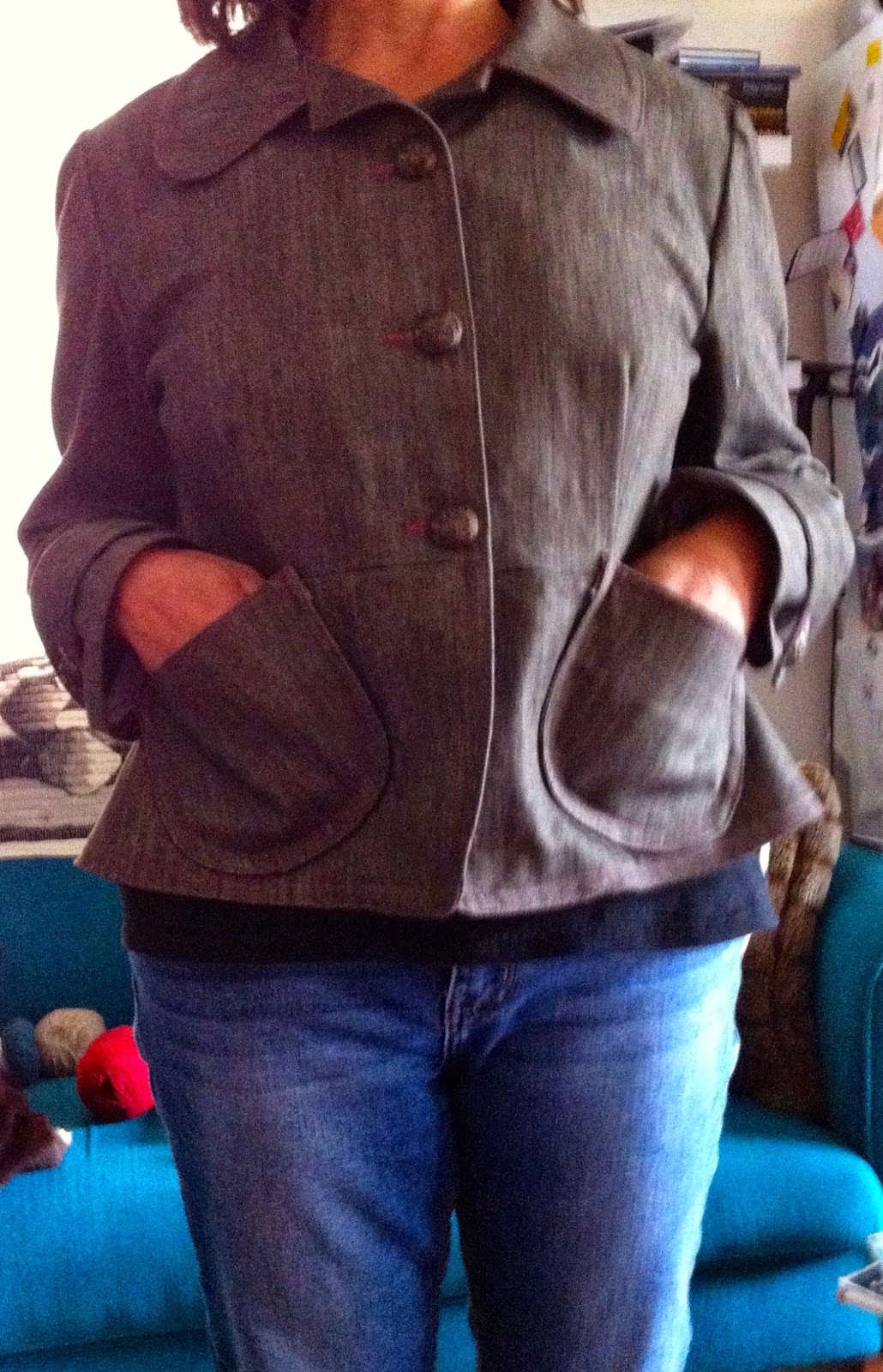 Although I could have done a much better job setting in the sleeves, I'm happy that I managed to reduce the width of the shoulder and at the same time reduce the amount of ease in the sleeve cap.

It's unlined but I've bound all the seams either with flat fell seams or bias binding. 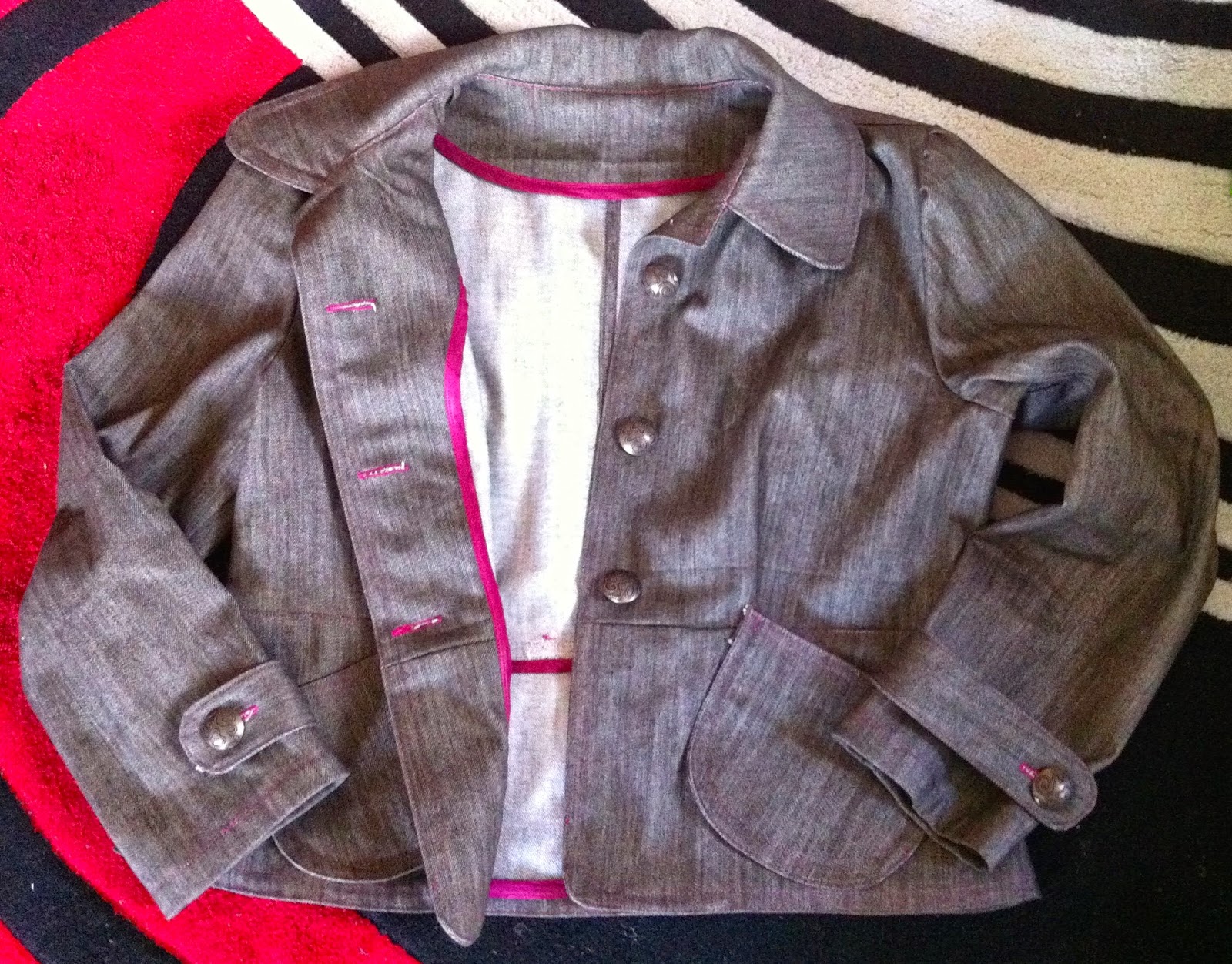 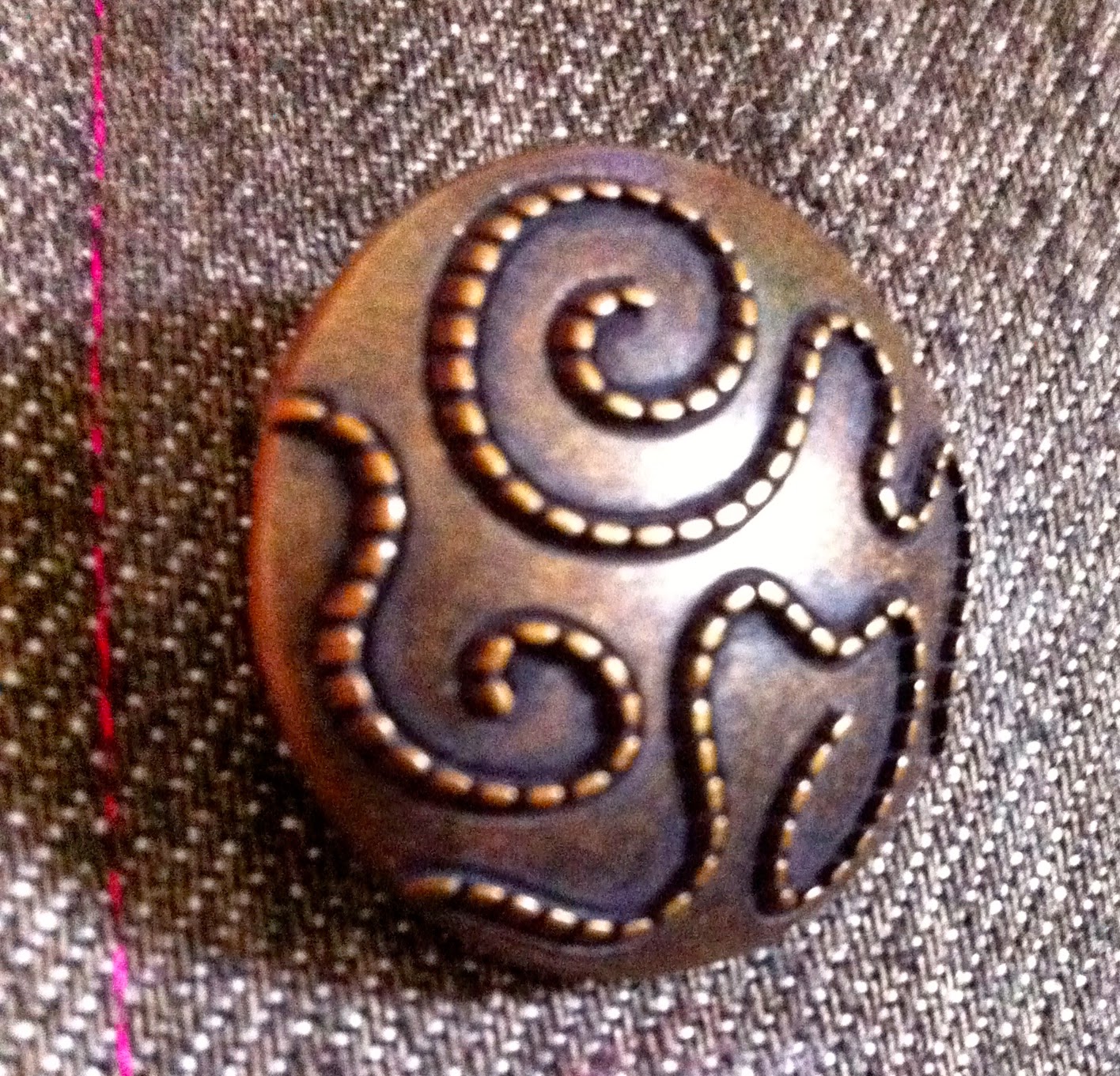 And I think that next time I make a topstitched garment I will splash out on topstitching thread and whatever needle needs to go with it.
Posted by Violet at Saturday, February 28, 2015 7 comments: Links to this post

Everything but the buttons

Here's a knit I prepared earlier.
It's the Cocoa Cardigan from Interweave Knits Winter 2015. 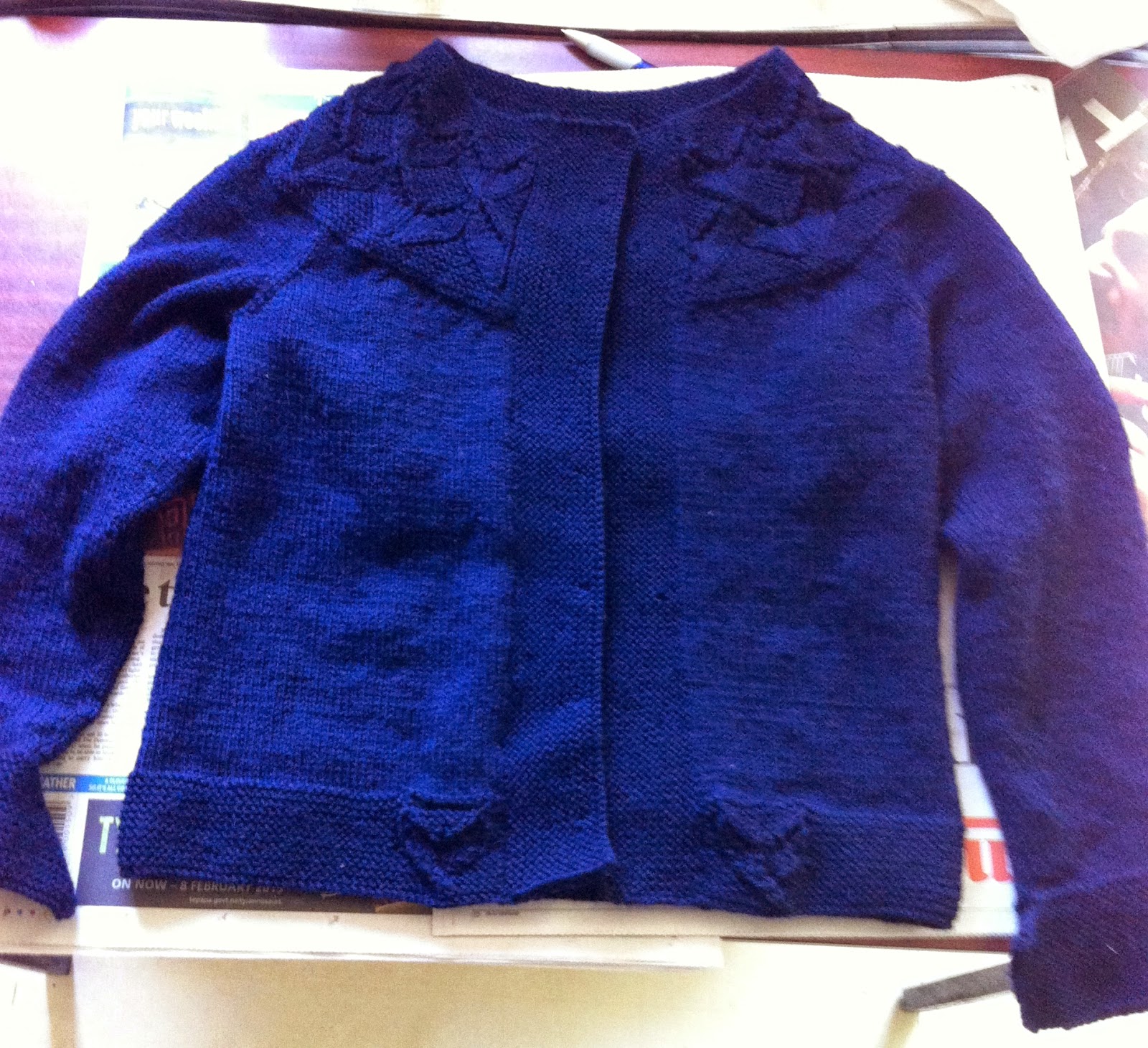 I will get buttons for it as soon as it gets cold enough to wear it. It's actually navy not the royal blue that it appears in the photo.

Why was I compelled to start a winter knitting project at the beginning of summer?
Posted by Violet at Saturday, February 28, 2015 No comments: Links to this post


This is how I know that I have a long, long, long way to go before I will be able to sew well-fitting trousers for myself.

It's a test garment made from a polyester twill, using one of the Simplicity Perfect Fit patterns. According to their instructions and my measurements I used their curvy fit. But as you can see I have a flat (and possibly droopy) bum and probably should have used the slim fit version (maybe).

All I can say is, I'm glad I don't have as much trouble finding jeans that fit me well...
Posted by Violet at Saturday, February 28, 2015 No comments: Links to this post

It all started when I looked up images of linen dresses on the 'Net and came across those super-oversized indigo Japanese dresses. They looked so cool (in both senses of the word) that I had to have one. I sewed one up and it fits - but I don't need to tell you that mine doesn't look as cool on me as those dresses look on those Japanese models. 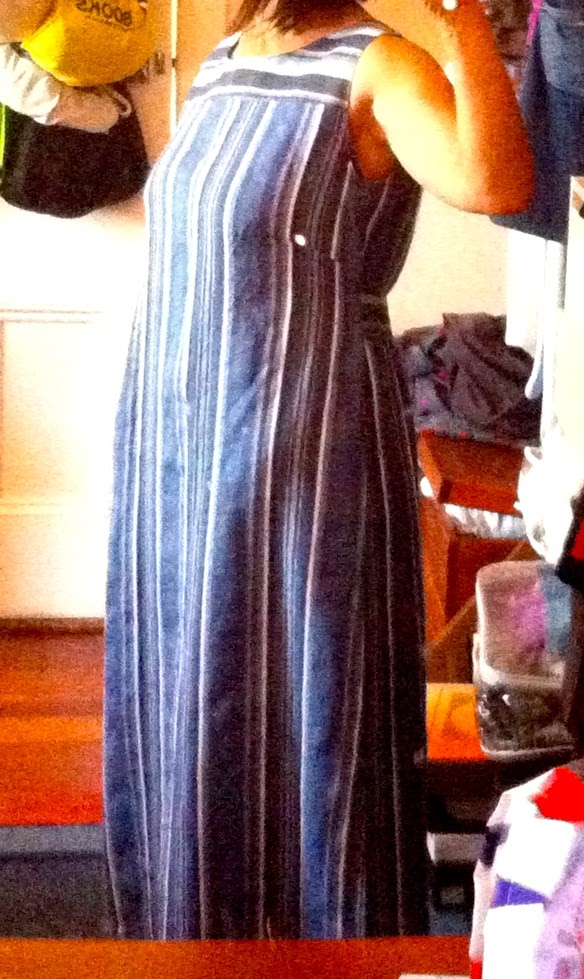 I am thinking of chopping off the neckline section and replacing it with a new bodice that has a deeper neckline.

I was more successful in my next Japanese-style activity though...

Continuing in the Japanese vein, I re-read Kazuo Ishiguro's Remains of the Day. Great story. Sad. Perhaps a touch too much detail about butlering. A great story nonetheless - I loved the way he made it about the relationship between a super-uptight butler and a housekeeper, while in the background World War II is brewing and his employer is unknowingly becoming a traitor. (As you can tell, although the writer is Japanese this is a very English story.)

Then I read Never Let Me Go, also by Ishiguro. I'd not heard of it before the movie of the same name came out, and didn't bother to go see it. The book is marvellous. He delves into a world in which... sorry I had to delete the next two sentences in case you want to read it and don't already know the "dark secret". But the main story is about the relationship between three young people as they are schooled and grow up. The other thing is just the background, yet it's what makes this story so heartbreaking.

It's very handy having a Kindle because I can go right through Ishiguro's entire catalogue.

The next one I finished was A Pale View of the Hills. A Japanese woman living in England remembers the time in post-WWII Nagasaki when she befriended a strange woman who lived alone with her daughter. Not a lot happens, and yet the story covers a lot about surviving in the aftermath of the atom bomb. The two previous novels left many loose ends. This one not only leaves loose ends, it also throws a few extra ones right near the end. Frustrating yet compelling, it makes me want to read it again in the hope that it will make more sense the second time around.

I hear his latest novel will be out really soon.
Posted by Violet at Wednesday, February 18, 2015 No comments: Links to this post

The cost of taxis

In my rush to get my mum out of her house, down the steps and into my car, I accidentally locked my keys in her house.

Her appointment was in ten minutes.

My mum had not brought her house key with her.

So I called a taxi to take us down the road to the medical centre (that cost $8, which my mum complained about even though she wasn't the one paying), then I called my brother to ask him to come and give us a lift back and let us back into her house.

While this was happening, my mum - who is obviously feeling much better lately, because she now has the energy to complain about everything under the sun - was telling me in a loud voice that she no longer wanted to get her injections because "everybody" says you only need to get them monthly rather than weekly.

My brother couldn't leave work any earlier than 6pm, so after her appointment I got another taxi to take mum and I back to my place. We would wait for my brother there.

That taxi cost just under $20.

We got home, my brother arrived, he drove us to mum's house and let us in.

I could not find my keys. Anywhere.

Then my brother found them outside on the grass, where I'd dropped my bag while helping my mum down the stairs two hours before.
Posted by Violet at Monday, February 09, 2015 2 comments: Links to this post