Chinese authors I have loved (to read)

Temporarily on a break from Kazoo Ishiguro, I have harked back to the Chinese authors I have often sought when looking for fiction I can relate to:

Of course, I enjoy Amy Tan immensely (apart from Valley of Amazement, which to me was like a Chinese Memoirs of a Geisha). I must find myself another copy of The Kitchen God's Wife, because I lent it to my brother a decade ago and never saw it again.The last one I read by Tan was Saving Fish from Drowning. This wasn't a mother-daughter themed story - quite a departure for her - but a good read nonetheless.

I have a copy of David Wong Louie's book of short stories, Pangs of love, which are mostly (but solely) about flawed Chinese American men just trying to have relationships, good and bad. The first few are my favourites, I suppose because they confront the cultural divide rather than ignore.

Wayson Choy wrote The Jade Peony which is set in Canada in the 30's and follows the stories of three members of a Cantonese-speaking family. It forced me to learn just how hard life must have been for Chinese in Western countries and back in old China (especially if you were female). But it's not an "educational" book. They are stories of three children growing up in a particular time and place and are very accessible. The grandmother is familiar, both annoyingly old-fashioned and refreshingly wise. I also recently finished another of his books which is about the same family but from the perspective of just the eldest son.

Patricia Chao's Monkey King is a dark tale of a young woman who tries to kill herself because of stuff that happened to her as a child, and how she deals with those things in a mental institution afterwards. It's not utterly depressing though so don't let that put you off.

The above are all North American writers. Why haven't I found the works of any Chinese-British authors at my library? Or those of Chinese Australians or even Chinese New Zealanders?

(Actually I do have two books by a Chinese New Zealander - When the Moon Turns Silver by Alison Wong, plus a book of her poetry. They are great. )

I need to read fiction that feels like my kind of reality. The only way to find it these day is do what Phil Twyford did to try and convince us that overseas Chinese are buying up all of the Auckland houses - I look out for Asian-sounding surnames along the stacks.

I had a ball of fuzzy alpaca/merino yarn and decided to knit a hat from it. It's very light and wide so fits both TLM and me. I reckon it would fit the boy too, but he is fundamentally opposed to slouchy hats.

As TLM is the more photogenic of the two of us willing to wear it, she's the one you get to see modelling it. 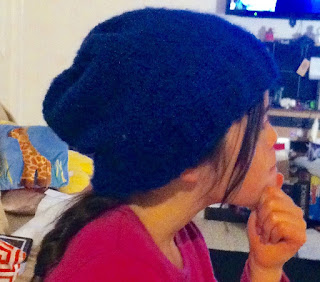 Posted by Violet at Saturday, July 04, 2015 No comments: Links to this post