Last weekend we went to Matiu/Somes Island, staying the night in one of the houses there and returning to the mainland the next morning. We went with Make tea not war, who came up with the idea in the first place.

TLM and DOTH (Make tea's Daughter Of The House) get along like a house doused in petrol and set alight by an unsuspecting male model. I could tell because they didn't go to sleep until about midnight and and were running about like an elephant stampede well before dawn. Well before dawn...

On the Saturday, we went for a walk around the Island, visiting the lighthouse (now automated), the animal internment building (sort of an Alcatraz for cows and sheep, except they were mostly innocent), and the tiny cave to where an unfortunate Chinese man was exiled because they thought he had leprosy (and the white lepers refused to have him).

It's also where Germans, Italians and Japanese people were interned during World War II.

So yeah, a lot of history on that bit of rock and kind of a best kept secret around these parts.

And two days later I had to go to Rotovegas for work, for three days. Ah, the smell of Rotorua...
Posted by Violet at Saturday, October 27, 2012 3 comments: Links to this post

Yesterday I shouted morning tea for the office because it was my birthday. I brought in caramel slices, strawberry slices, chocolate cake and afghan cookies - all home made by the baker at Midnight Expresso.

Unfortunately I'd bought enough cake for three times as many office staff as we actually had in the office. So throughout the day we (mostly me) picked at the leftovers.

By the end of the day I was totally caked-out and was willing to restart that sugar-free diet that I abandoned last year (after one week).

Then I got home and my wonderful family shouted Happy Birthday!

And presented me with an enormous cake...
Posted by Violet at Saturday, October 13, 2012 2 comments: Links to this post 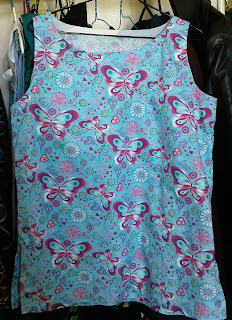 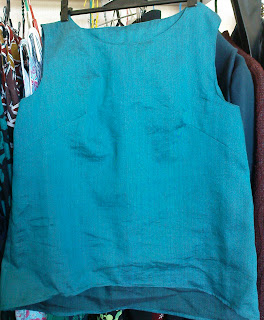 Daylight Saving time started yesterday morning, and I found myself up at the crack of dawn (7.30 am DST).

It was only after about two hours of reading the weekend paper and generally pottering about, that I realised I could actually do some sewing.

Sewing! After about two years of not having time for it!

It was partly brought on by the fact that hand knit clothes are far too warm for summer temperatures (even the low-ish temps we get around these parts), unless one is willing to knit something lacy out of something lace-weight. I'd wandered around the shops but all the tops were really oversized and down to my knees.

So on Sunday morning I started making a sleeveless tunic out of some China-blue linen-blend fabric from my stash of mostly remnants and discarded jeans (from my refashioning heyday), using a very simple - some might say shapeless - McCalls dress pattern.

When I got to the hem I had a flash of inspiration and turned it into a curved hem - shorter in the front and longer in the back.

It was all finished a couple of hours later (it was a "one-hour" pattern) I wore it today and it was appropriately cool for the office's hothouse temperature.

And now I'm all excited about the possibility of making more simply-shaped tops in lovely fabrics.
Posted by Violet at Monday, October 01, 2012 No comments: Links to this post