Last time Kowtow had a sale I missed out on getting an Elda denim jacket. 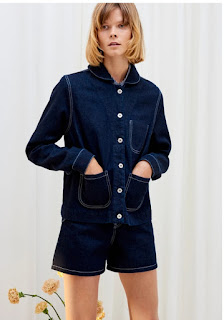 They just had a other sale, and I found a Blueprint jacket on sale 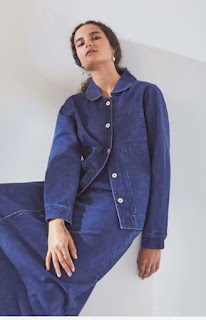 but they had none left in siz size 😥.

So I had a go at sewing my own. I used the Merchant and Mills Ottoline jacket pattern. The only intentional mods were to shorten the jacket body a little, shorten the sleeves a lot, and change the shape of the collar (to make it more like the Kowtow ones). There were some major muckups (ie the unintentional mods) but I think I turned out something I can wear proudly.

Taking nibble out of coastline litter

You will have all seen the photos, of rubbish islands in the ocean and litter-coated beaches.
A couple of weekends ago I decided to finally go next-level with my occasional litter picking, and join a beach clean-up organised by Sea Shepherd.

Unfortunately when I got to the beach there were no Sea Shepherd folks to be found, tho there were three other willing volunteers. I did also meet a woman who was just finishing up her own beach cleanup session and she gave me a rubbish bag in case I wanted to go ahead and pick up rubbish anyway.

So the 3 volunteers and I set to work on the beach. 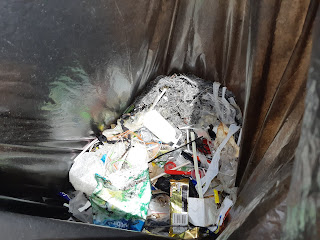 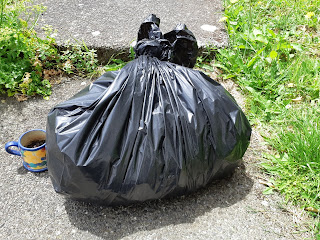 As I was wearing my Sea Shephard t-shirt - and probably because I was the oldest one present - I seemed to be the de facto leader of the cleaning pack. This meant that though all of us were on foot I was the one who would have to take the back of bottle tops, straws, coffee stirrers and unidentified plastic crap to my rubbish bin at home.

This meant that we had to stop after about an hour. This half-filled our council rubbish bag once I got home (ie equivalent to one week's worth of household refuse).
Posted by Violet at Monday, January 13, 2020 No comments: Links to this post

The universe wants me to stop buying fabric

Summer suddenly arrived and I developed a hankering for above-ankle widish leg linen pants, and i wanted to sew them up myself.

The Fabric Store has some lovely linen in different weights and luscious colors.

Well, twice during the christmas period I tried to go to The Fabric Store. And both times the shop was closed.

So I took the hint and when I got home I customized some mustard coloured king fu pants instead. 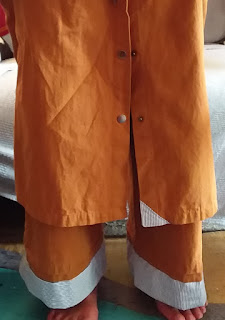 Posted by Violet at Wednesday, January 01, 2020 3 comments: Links to this post

This week's Fridays for Future placard 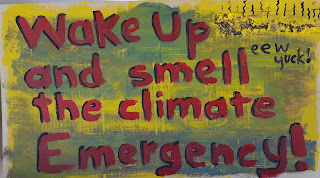 I brought this one with me on 27 December.

Only after I arrived, did I realise I should have done something a little more Christmas-y. Like, "Have a merry climate emergency".

But that's ok. It was the first F4F protest that I'd been able to attend for the full 2 hours, and there were quite a few others present which was a relief.
Posted by Violet at Wednesday, January 01, 2020 No comments: Links to this post