My wallet thanks me for dithering

It's supposed to be a Libran characteristic to swing from one extreme to another (thereby achieving balance overall), and I wonder whether this explains why I splash out on $360 boots one day, but will refrain from buying a beautiful bit of fabric at $12 per metre; why I spent a couple of hundred bucks on concert tickets to David Byrne for the boy last Christmas, but this year am thinking of just getting him a joke apron.

The boy often tut-tuts me if we are out shopping together and I can't decide whether I want something badly enough to actually buy it. But I reckon such indecisive behaviour has probably save us tons of money over the years (making up for when I have cost us tons of money...).

Anyway, we have started the ball rolling on the getting of Christmas gifts for TLM - I got her several tubes of acrylic paints so that she can colour her skin and clothes...and maybe make a few marks on paper while she's at it. I plan to decorate a box to put them in (she loves containers), so she will always have a nice container for her painting gear.

Does anyone know how to paint a fairy?
Posted by Violet at Monday, November 30, 2009 6 comments: Links to this post

It's been years since I've been to a Festival of the Arts event - the tickets are usually pretty expensive and anyway I've become such a homebody.

But Neil Gaiman and Simon Schama (of History of Britain fame) are two of the writers who are taking part in the Writers and Readers programme. I really enjoying Schama's History, while Gaiman is the boy's all time favourite auther.

So we are going, recession be damned!
Posted by Violet at Thursday, November 26, 2009 1 comment: Links to this post

My first thought when I saw the word "Sears" on the library book spine, was that it couldn't be very interesting - after all, aren't they purveyors of el cheapo pre-fashion-conscious, mass-market American clothing? But I had a quick squizz and then checked it out. And in the last week I've been poring over every page, going goo-goo over the dresses, tunics and shoes.

What I wasn't expecting was that I could actually see myself happily wearing some of those outfits (but not with the corresponding hair-dos and make-up - and probably not in those synthetic fabrics).

Now, I was only ten in the early 70's. So you can't blame my sudden love for early-70's fashion on nostalgia (though I do remember flared trousers, and the advice in Woman's Weekly magazine was to avoid them if you have short legs). Although the recent 60's and 70's revivals might have something to do with it.

What I love are:

It feels kinda cool to be able to slot myself into the late 60s-early 70's fashion peg. But I'd have to be careful to avoid the paedo-chic look, because some of those outfits are really only suitable for teenagers.

I've since gone back to the library and checked out the Early 50's version of this book, but it's not nearly so inspiring. It's probably because womenswear of this era was all about the cinched waist, and if I tried to do that to myself I'd faint.
Posted by Violet at Wednesday, November 25, 2009 No comments: Links to this post

I don't know why, but I have an awful lot of trouble staying alert at our staff meetings. They are always on a Monday morning, when you'd think people would be at their most alert - but not me. I manage to keep my eyes open, but thank goodness I don't have to do anything other than listen and nod my head occasionally.

They must all think I don't do much because I never speak up to tell everyone what I've gotten up to in the last week. I doubt they think I'm just tired from my wild and crazy weekends.

On the other hand, afternoons are not a great time for meetings either because of the great possiblity of post-lunch drowsiness.

Perhaps there is no good time for a meeting.
Posted by Violet at Monday, November 23, 2009 2 comments: Links to this post

A long and winding road 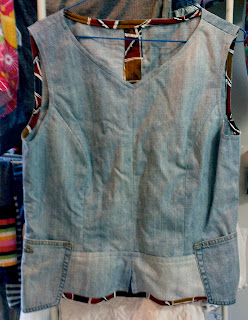 To recap: I started out with a pair of men's Lacoste faded denim jeans, which the boy had thrown out because the knees were ripped.

I had a grand vision of turning it into a shell top, sorta like the kinda you might to work under a jacket, but denim. A bogan corporate look, if you will.

Unfortunately, it looked very very bad on me.

And here is what has happened to it since:

I found two pairs of old jeans of my own, and decided to add them to the top and make a dress. The jeans were both different types of denim and different shades of blue.

I couldn't decided whether to go deconstructed and obviously made from 3 pairs of non-matching jeans, or to aim for a more sophisticated look. In the end, I put the whole thing through a navy blue fabric dye to even up the colours.

What I didn't forsee was that the white thread I'd used on all the seams and topstitching would not dye. Also, it was supposed to have an empire waist, but something happened there...
So now I have a very Seventies-look denim dress, perhaps a bit home-made looking but I guess that was part of the Seventies thing too, no? 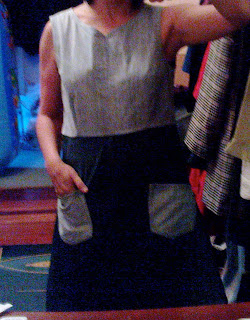 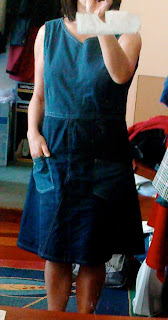 Here it is anyway. I'm gonna wear it for a while before deciding for sure, but I'm thinking of adding either a minimal ruffle down the centre front, or else a row of small white buttons (blue would have been better but I got 3 kinds a blue goin' on here).
Posted by Violet at Wednesday, November 18, 2009 5 comments: Links to this post

I know what I like, but I may not know anything about fashion

A friend of mine very generously shouted me a ticket to a design school fashion show. I was keen to check out what the creative young things are doing these days.

There were some nice tailored items that I could imagine being worn by fairly normal people in the street, many fanciful outfits that I thought belonged in the Wearable Arts awards and a few that were kinda uninteresting. There were clothes that made music when the models walked (cute, but potentially life-threateningly annoying), clothes refashioned from jeans (a nice idea but hardly original), and architectural constructions that looked like their creator was channelling Issey Miyake.

Obviously, the outfits looked like they were designed for 20-25 year olds.

Funnily enough the award-winning collections were, almost without exception, the ones containing the clothes I just didn't get and couldn't imagine anyone wearing outside of avant garde fringe theatre.

Although, perhaps some of my less-than-positive reactions were the result of fashion-fatigue. At 2.5 hours (with a 20 minute break in the middle), it was awfully long.

It was great fun though, and well worth the half hour walk in gale force winds to get there.
Posted by Violet at Saturday, November 14, 2009 2 comments: Links to this post

We've been watching a TV series called John Safran vs God. It's really quite interesting. Safran's an amusing Aussie who, in this series, explores a wide variety of religions around the world.

Although he's funny, he doesn't mock the faiths (okay maybe a little, but only occasionally). He's (mostly) genuinely curious and open-minded, whether he's trying to find enlightenment in a Buddhist monastery, participating in a Voodoo ceremoney or being smeared with chicken blood in an African magic ritual (to undo a curse on Australia's soccer team).

So, really, this show would be more accurately titled John Safran looks for God.

The last episode was really quite freaky. Safran decides that all his toe-dipping into the religious pools around the world may have left him vulnerable to demon posession and visits an exorcist. The freaky thing is that, in the exorcist's hands, Safran really does behave like there's something bad and weird in there somewhere. Even his camera crew admit they've never seen him act like that before. It certainly didn't look like an act to me. The whole thing ends with Safran, who is Jewish, giving into the exorcist's pressure to become Christian, as "the next step" in his cure.

Unfortunately, there's no debriefing afterwards - so we're left with no idea as to what Safran remembered of the experience later, or whether he regrets giving up his Jewishness.
Posted by Violet at Wednesday, November 11, 2009 7 comments: Links to this post

What a week - it started with funeral service, ended with yet another cold and in the middle was a (in my humble standards) great Guy Fawkes party.

The party was held at a co-worker's home up in the hills overlooking the harbour. She has this amazing house whose walls are almost completely comprised of glass and it sticks out from the hill like a big glass elevator on one of those fancy high-rises. I only knew the hostess and two others, but the other guests were really easy to chat to, so I had a really nice time. It reminded me of the old days when I used to go to parties full of strangers and pretend to be tiddly just so's I'd have an excuse to brazenly break into conversations uninvited.

It was also bloody freezing, and all because I was too lazy to go downstairs to retrieve my jacket.
Is it just a coincidence that I've now got a cold, or is it really possible to "catch a chill"?
Posted by Violet at Saturday, November 07, 2009 5 comments: Links to this post

Funnily enough, for a person who claims to have far too much black in her wardrobe I did not have a plethora of funeral-friendly outfits. Of course, it didn't really matter what anyone wore, because our faces were not exactly festive.

The place was completely packed; cars parked each other in and there weren't enough chairs for all the folk who'd come to say goodbye. The casket entered the room accompanied by a Maori chant which I don't know the name for - like a powhiri but probably different. Members of the family and old friends, often overcome by emotion, recounted anecdotes from the editter's life and reminded us of the qualities that endeared her to us - the super-quick wit, the scarily sharp memory, the ease with which she made friends and her way with children.

Of course, I teared up as soon as we arrived and didn't stop until the end of the service.

I would have liked to stay after the service ended; to join in with the the reminiscing would have made it easier for me to walk away with happy memories in my head. But I had to get back to work, so we said our goodbyes to the ones we knew - only to return because someone's little blue Chevrolet Cruze had parked us in (which no one would admit to owning, but which mysteriously disappeared soon after I made the request public).
Posted by Violet at Monday, November 02, 2009 3 comments: Links to this post