I started this hat because I wanted a project to take to the Knit World knit-in session a while back. But I only went a couple of times because it wasn't looking promising (four people turned up the first time, three the next).

Then I got bored with making the boy's denim surf top again and decided to finish the hat instead. 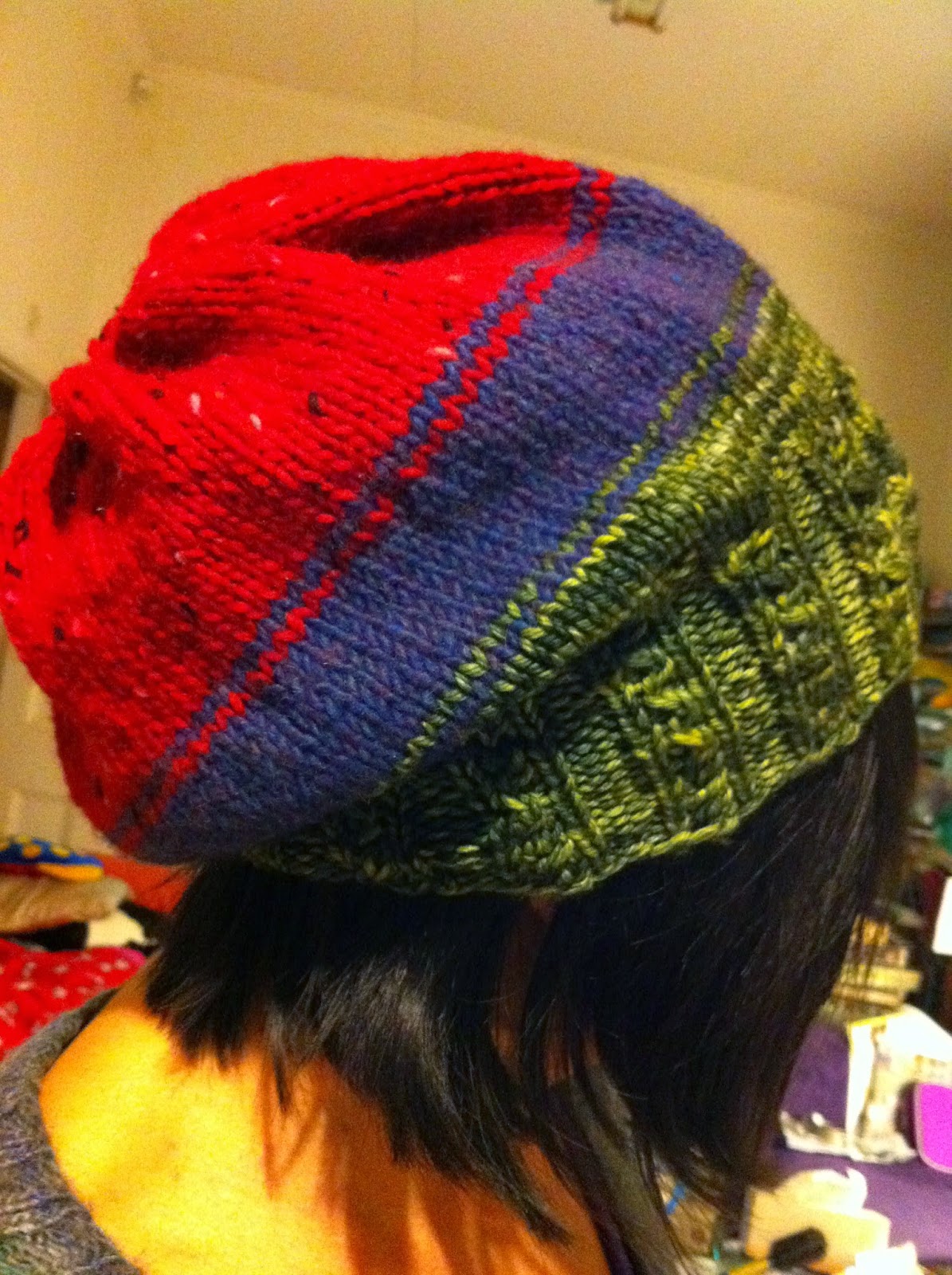 It's Kiwiyarns Knits' own Cafe Hat pattern (but I stuffed up the ribbing and used different types of yarns so it's barely recognisable). Hopefully it won't be cold enough again to wear it until next autumn!

I've also posted it on Ravelry.
Posted by Violet at Friday, October 31, 2014 2 comments: Links to this post

Vodafone gets to live after all

In case you'd had sleepless nights worrying about how my mum is doing without her only connection to the outside world (her landline phone), you'll be relieved to know that her phone was back on around midday yesterday. So you can call off the boys with the big sticks and knuckle-dusters.

It took me three long calls and an email of complaint (and possibly another call from the sister in law)  to achieve this. While they were at it, they also put the phone account in mum's name.

If they'd only done this latter task when I first asked them to (at the beginning of this month), it would have saved us all a lot of stress, frustration, wasted time on hold and in hopeless conversation and me getting unwanted instructions from family (but not the boy because he was just lovely and supportive) on how to "fix" the problem.

But at last the problem is fixed (though I still have to check they aren't going to try and bill her for two phone accounts or anything stupid like that).
Posted by Violet at Friday, October 31, 2014 2 comments: Links to this post

Labels: about the mother

Shame on you Vodafone

Hyperventilating with frustration, I have just sent Vodafone a formal email of complaint. Do you want to know why? Because they disconnected my mum's phone which is her only way to get hold of  anyone, even though she's done nothing wrong.

It's because I have so far found it absolutely impossible to get my mum's phone account transferred to her name, from my sister in laws. It was in the sis in law's name because they lived with her for a while (before they left with the relationship between her and my mum in utter tatters) and set up her phone at the same time. Before that I believe it was in my brother's name.

They won't do it unless they can speak to both the sis in law and my mother. The sis in law spent an hour on hold with Vodes before being able to do her half of the transfer (get her name off the account).

We had trouble with the next step though. My mum doesn't speak English, I told them (more than once). They were sorry to hear that, because after another long wait they told me that meant they could not transfer the account to her name.

Transfer it to my name then, I said. After 20 minutes or so they said no, they can't. Because I am already a Vodes customer and I'm not allowed to have two different accounts with them (wtf?).

Okay, I said. I give up. Please lets go back the way it was. Okay, they said, we'll do that.

Then they disconnected my mum's phone. My mum, who is 90 years old, fairly deaf, frail, only conversant in Cantonese and mostly illiterate, needs her phone to be working. Not least because her medical alarm is connected through it.

But it has been impossible so far to get her phone reconnected.

What I would like to do is to take our custom away and go start an account up with a competitor - but it's quite likely we'd have to get the sis in law to talk to Vodafone again to do the first part!

And one last thing - they were going to charge my mum an extra $1.50 each month for receiving her bill in the slow mail. Pretty shoddy, considering she doesn't do email and is unlikely to suddenly start.

Shame on you Vodafone.

Labels: about the mother

On the occasion of my fiftieth birthday...

Astonishingly (and refreshingly), there is no McDonalds on the island of Rarotonga.

If I'd been told this at the beginning of our stay, I would have expected a very un-tourist-y family holiday.

We stayed at the Edgewater, which turned out to be the largest resort on the island. With hundreds of hotel rooms and villas (we stayed in a villa), it probably covered more area and had more inhabitants than Avarua - Rarotonga' downtown. So yeah, it is touristy - but not actually not all that touristy.

Some of the resort's more charming aspects, which made our stay all the more enjoyable, include: the super friendly staff; the very attractive floral prints they wear; the free range chooks that wander about unimpeded looking for tourist-borne snacks; the tropical fish-laden lagoon and the Ika Mata (raw fish marinated in coconut cream).

The boy introduced TLM to snorkelling, which quickly became her favourite daily activity (I myself took a couple of goes to get into snorkelling - breathing through a tube whilst under water freaks me out). TLM's second favourite activity was splashing me in the pool.

I painted my own sarong, TLM and I learned how to make a head garland from the gorgeous array of tropical flowers, and we all learned more than we ever thought we'd want to know about coconuts.

We also took a tour of the sights, on our last day. I was highly amused at the "sights" that we took in - the local hospital, several schools, the Cook Island house of parliament (which looks like a low-income boarding house) and so on. But there were some highlights too - the spot where the seven waka were supposed to have launched, carrying those who would become the New Zealand Maori hundreds of years ago; the beach at Muri; and the interesting but tragic story of a particular church built from huge chunks of coral reef (sacrilege, I know), whose builders died in the hundreds from lime poisoning.

And now we are back home. It's a relatively chilly 17 degrees Celsius but at least it won't be too hot to sleep tonight.
Posted by Violet at Saturday, October 18, 2014 4 comments: Links to this post

So, a no to the Kobo glo

I went and bought the Kobo glo yesterday, thinking it would be just the thing to hold half a dozen novels for our holiday in RAROTONGA.

But by the time I'd spent a couple of hours trying to set it up, with a few restarts to fix the screen freezing on me, I was no longer very enthusiastic about my new toy. All this, and I hadn't even gotten as far as registering. Then it wouldn't turn on.

So today the boy and I took it back to the shop and got a refund.

And we got a Kindle instead. The setup was so quick! And nothing went wrong! I've already downloaded several free classics and can't wait to play with it.
Posted by Violet at Thursday, October 09, 2014 No comments: Links to this post

I've been on a fiction-reading binge, which is really quite a change from my normal diet of knitting books, knitting magazines and Frankie magazine. And Capital magazine. (Yes, many magazines in fact).

The one I just finished was Girl in Translation by Jean Kwok, which was really good except for the breathtaking glossing over of how the heroine, her baby and her sweatshop-worker mother managed to survive while the former gained a medical degree and surgical training.

The two novels before that were a couple of ghost stories set in Alabama (or thereabouts) by RB Chesterton (which I enjoyed except they were quite match-matchy).

The one before that....actually I'll stop here.

Because the point of this post that I have decided it might  finally be worth getting an e-reader, now that I'm consuming a respectable amount of text-heavy product.

So I'm think I will get a Kobo. The boy said he'll get me one for my birthday, but seeing as he has just forked over way too much money to send us all off on holiday to Rarotonga, I would be fine with buying it myself.

And then I will check whether it's worth buying knitting magazines in e-format.
Posted by Violet at Monday, October 06, 2014 No comments: Links to this post

My eye, my stye and I

Not much to say (I just liked the title) - a dramatic swelling on the inner corner of my right eye, followed a night of unparalleled gunkiness...then it was all over.

Just extremely impressed at how quickly it came and went.
Posted by Violet at Thursday, October 02, 2014 No comments: Links to this post