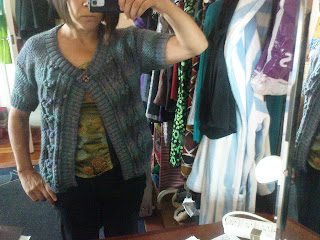 You know that saying "the camera loves her"?
Well the camera has really got a grudge against me, because since adulthood the only two photos of me I haven't hated have been taken in low light and from about 10 m away.

Anyway, the cardigan's finished, just in time for our trip to the UK in their spring. I'll be wearing it over long sleeves of course, so protect my dainty skin from wool-irritation.

It will probably look much better over a black t-shirt rather than the shiny green thing pictured here.
If you want the the whole gory knitting story, go here.
Posted by Violet at Tuesday, February 28, 2012 5 comments: Links to this post

It was a sewing book.

Just kidding. After a long stretch of narrowly focusing on that particular aisle in the public library which starts with interior design, moves onto cross-stitch, weaving and knitting before finishing with crochet - I decided that I had enough cardigan patterns.

So I read David Sedaris' When you are engulfed in flames, which I loved. It's one of those blackly funny memoir-type books which I would have loved to write myself (but my protagonist would not have been a gay American ex-smoker). I liked it so much I went back for another one - which title I forget, but it's full of animal stories (as in, there are no people but the animals are people, if you get my drift). It's also funny, bleak and makes me nod my head and go "yes, that's right".

I also have The Freedom Manifesto by Tom Hodgekinson. But it's not as interesting because it's too simular to his How to be Idle. I suspect the author's a bit of a libertarian, as he's always going on about how the government is controlling the population. But he is also anti-capitalist, so that's alright. I can't help feeling though that his way of living only works if you are a free-lancer and if everyone else is still part of the "system".
Posted by Violet at Friday, February 24, 2012 4 comments: Links to this post

I've been worrying about TLM because, even though she's the nicest, cutest, most imaginative and  charming 6 1/2 year old I know, she is sometimes friendless.

At school TLM has tons of friends - no worries there.
But at Chinese School (which is weekly), if her cousin isn't there then she has no chums amongst her classmates.

After each Pippins meeting lately, she tearfully complains that the other girls won't talk to her. It hasn't put her off going, and it's probably due to her being the only girl in the group who doesn't go to school there. But the thought of her sitting all by herself while gaggles of girls giggle around her, makes me sad.

TLM also does a bit of Chinese dancing. And it's a really similar situation there. They don't all go to the same school or anything, but they are pretty clique-y.

Probably, if I don't do anything, she will eventually either make more friends just by being her lovely self - or turn out to be one of those types with a really small number of wonderful friends rather than a hoard of casual friends.  She will probably be fine.

It's hard not to try to make it better though.
Posted by Violet at Friday, February 17, 2012 7 comments: Links to this post

Is this how yarn stashes begin?

When I buy knitting yarn, I usually have a project in mind already - like a specific pattern I want to use. That way, I know exactly how much yarn to buy and what colours to use. It also minimises the risk of building a huge stash of yarns that I don't necessarily know what to do with.

It's very very tempting to buy just about everything, especially the Rowan yarns which are prohibitively expensive here (like, $18 for a ball of Rowan Jeans for example). But I want to support my local yarn shops and New Zealand yarns etc, so I'll try to stick to yarns that I can't easily get locally - like cotton or silk types. And Rowan.