Within spitting distance of Jermaine

The other night I took TLM with me to the opening of an art exhibition, featuring a friend, his wife, and  a third person whom I didn't know at all.

We started with dinner for TLM at a Vietnamese place called the Mekong, where she enjoyed two types of spring roll (the "normal", deep fried kind and summer rolls) - I had to take a photo of her with both cheeks full and both plates bereft.

The exhibition was packed. There was live music played by my friend and, among others, two librarians I knew from our local library (including one keen knitter). They sang songs in Spanish and looked like they were having the best time.

Then I saw this tallish, hairy guy just in front of me and realised it was Jermaine from Flight of the Conchords. "Of course," I realised, he is my friend's nephew so of course he'd be there. In fact this friend was the one who recommended that I go see the Conchords a few years back (pre-US tv show).

But I did the Kiwi thing and pretended he was not an international celebrity. Some would say it's because we just aren't into celebrities in NZ. In my case though it was probably just shyness (I was just as lame when I had a chance to talk to my favourite NZ artist Shane Cotton, and didn't).

Besides, I prefer Brett.
Posted by Violet at Sunday, April 28, 2013 2 comments: Links to this post

You can tell the drought is finally over when our laundry is once more an unmanageable mountain of unwashed clothing. I was hoping to get a couple of loads up on the line today, but of course right after it was all hung up nature decided to make a liar of the weather forecasters (who hurriedly update their forecast from sunny to rainy) - and it all came down again. Towels too, they were - nice and thick and taking an age to do in the dryer.

On the plus side, it is occasionally cool enough for me to wear my new hat (also on Ravelry). 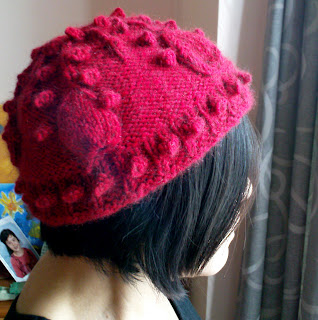 We've had a skip bin sitting on our driveway all weekend, and we've been filling it with all sorts of junk. I'm astonished that we actually managed to fill 7.5 cubic meters - almost the size of our garage!


It was rather too exciting having to be the one to go up the ladder to get into the attic (the boy couldn't get through the hole because his shoulders are too wide. No, really!) But I did it and that's enough for the next few years.

At times (generally while throwing rubbish into the skip) I felt like Derek Zoolander having a go at being a coal miner (with less posturing).

Now I'm resting, fully fed by the boy's home-baked pork spare ribs and a very large slice of framboise, with a big box of tissues because my sinuses are going absolutely CRAZY.
Posted by Violet at Sunday, April 14, 2013 1 comment: Links to this post

The boy said to me that I should never clean the oven - rather to let him do it because it's such a dirty job (almost as dirty as cleaning poo-covered knickers, back in TLM's toilet training days? I don't think so).

So I let him. Only I never saw him do it. So last weekend I cast a layer of baking soda over the floor of the oven and covered it with a generous sprinkling of vinegar. Then I sprayed a mixture of baking soda and vinegar onto the sides and top of the oven, where the element was.

The next day I was pleasantly surprised at how easy it was to wipe the grime and grit (and bits of broken and baked gasket (the rubber bit which seals the heat in when you close the door).

The sides and ceiling were another story, and I had a go at scrubbing the element - just for a minute or so to remove the unidentifiable black protuberances.

The oven racks were much easier, requiring only a metal scrub and a bit of elbow grease.

So, not a great job but it definitely looked less like a stone age barbeque pit.

Later on that evening...you know that joke about a derelict old house so ramshackle that the only thing keeping it from total collapse was the termites inside, holding hands?

Yeah, the oven has stopped working. (And if I'd known this was gonna happen I could've saved myself a lot of cleaning effort!)
Posted by Violet at Wednesday, April 03, 2013 5 comments: Links to this post