Today I had to fly up-country to take a training session. It was organised by someone based up there, and presumably all I had to do was turn up with new knowledge to impart.

But because I'm a training-away virgin, I didn't think to check carefully exactly what facilities would be available - computers, yes; broadband connections,yes; lunch and snacks, yes; whiteboard, yes. Whiteboard pens, data show projector, dunno. Would everyone bring their manual, dunno.

She said something about an overhead projector, but I wasn't interested in creating a bunch of transparencies because I was going to distribute a load of printed handouts instead.

"Just you wait - they'll spend half an hour just trying to log in!" one of my colleagues (a seasoned trainer) said.
"Better take some whiteboard pens and duster", advised the training manager, "because you don't know for sure there'll be any up there".
"You should take a laptop and a data show projector", suggested the boy, "so you can subtley show them how to log in without making obvious your low opinion of their technical abilities".

So I packed a laptop, a data show projector, a wad of printed handouts about the size of an Auckland phone book, a couple of whiteboard pens and the office's only whiteboard duster, and packed it into two bags. Then I had to practice walking around with them as though they were really light, so I wouldn't be forced to check them in at the airport.

I reckon the airlines must gotten into trouble with how they show passengers the safety rules or something. Because in the old days no-one seemed to care if you you could look out the window or napped while they showed you where the exits were.
But on my flight out, the flight attendant actually scolded one passenger like a naughty schoolboy, for talking instead of paying attention. Times sure have changed.

Then I got to my destination, got a lift to the training venue, and found out that there was already a data show projector in the room, already connected up to the computer I'd be using. I needn't have packed the laptop and projector after all - I could have swanned about with just my handbag, saving my shoulder muscles much trauma and strain. There were also pens and dusters a-plenty, and no overhead projector to be seen.

p.s. I think the session went well - no one went to sleep, and everyone managed to finish the practice exercises. But they nearly fell over each other trying to leave when I finished half an hour early.
Posted by Violet at Wednesday, November 24, 2010 5 comments: Links to this post

Lately, because it is Spring I suppose, I've been really itchy all the time. Well, I am an eczema-sufferer so that's to be expected. But at the moment it's kinda out of control, in a way that makes a burqa seem like a really practical clothing choice.

I've tried taking antihistamines but most of them don't work - some of them make me dopey and drowsy, but none of them stops me from wanting to rip my skin off at inconvenient times of the day.

Tonight, after dinner, I took a tepid bath with a dose of Pinetarsol. On the bottle it says that it will calm and soothe irritated, inflamed skin. What it doesn't say is that it turns your bathwater the colour of stewed tea, and really, really stinks.

In fact, as soon as I lay down in it I started to feel ever-so-slightly ill. After I got out, I developed a headache.
And I'm still a bit itchy (though at least I don't feel like setting myself on fire so that's probably a plus).

So far, the most effective anti-itching thing I've tried is knitting. I just have to work out how to do that in my sleep.
Posted by Violet at Thursday, November 18, 2010 2 comments: Links to this post

Coming up is our first experience of trying to work out how we are going to manage both of us working full time with school holidays. It's only 5 weeks away!

It would be so simple (and actually really nice) if I could just take holidays when TLM has them. But TLM's summer holidays is about 5-6 weeks long. Even if I took a whole year's worth at once, it would not cover her summer holiday. And that's ignoring the upcoming 2011 holidays - Easter (1 week, I think) and three term holidays (2 weeks each).

Of course, we haven't got around to organising anything before now (and when I say "we" I mean "me", because somehow now that the boy is not a house husband, all child-related issues are my issues). The boy says he is going to be ultra busy, and beside he doesn't even get paid leave as he's a contractor, and he just wants to get paid.

Somehow I just assumed that the after school care company did school holiday programmes too, but as far as I can tell they don't have this service in our part of town - though their website is 3 months out of date so I am still waiting to hear back from them. But even if they did, I'd be very reluctant to send her off for whole days away, even for just a few days per week.

Good grief - how do other families do it?!
Posted by Violet at Tuesday, November 16, 2010 6 comments: Links to this post

It's been maybe three weeks since the boy started his new job. He seems to be enjoying the challenge of doing something almost-but-not-really like what he used to do i.e. project managing the update of state schools' computer networks rather than managing a team of super-geeks in a super geeky IT shop.

TLM is enjoying going to after school care three times a week. To her, it's just like the good ole days at daycare when all she had to do was play.

And even though I stressed horribly about asking my boss to let me leave work early to pick up TLM from school on the other two days per week, and even though I hate having to work at home to make up for leaving the office early - I do enjoy having that extra time with TLM.  She is reading on her own (sometimes - other times she just makes up new stories), inventing crazy dances and teaching herself yoga from a children's DVD.

The one thing we haven't been able to enjoy is the extra income. The boy only gets paid after a big slab of work is completed and it's quite possible he won't expect anything incoming for a few more weeks. Which is hard on our already-meagre finances, because our expenses have suddenly shot up (mainly petrol and TLM's after school care).

Though the boy had a quiet chat with his boss yesterday and it looks like we can afford to have a reasonably fun Christmas after all. Which means I won't have to give hand-knitted acrylic blue face cloths to the rellies for Christmas presents.
Posted by Violet at Saturday, November 13, 2010 4 comments: Links to this post

I finished my test trousers (Burda Nov 2009, #124). They are made from a light-to-medium weight stretch denim which looks a bit like grey flannel from a distance.

I wore them to work - they were really comfortable, and slightly better fitting than most of the shop-bought trousers I have.

But the next time I went to put them on, they were baggy and yucky - big flaps of fabric around the thighs and far two much fabric at the crotch. And I had to yank them up every time I moved, so I didn't end up wearing them to work.

I put it down to the fact that stretch denim has a tendency to stretche half a size to a size after just one wearing. So I took them in at the sides.

Now I don't have to yank them up all the time, but somehow I've ended up with a fit much worse than I had originally. And here's where a coupla pictures is worth a coupla thousand words...

What the heck is causing that almost-camel toe?

Is it because the metal jeans zip iss weighing the fabric down?
Have I just got a fat pubis?
Or do I need to let it out at the inside leg?
Whatever it is, it's definitely a familiar problem I've had with some shop-bought trousers (only not as obvious as here).

Anyway, if you know the answer, please tell me - because otherwise it'll be back to the rip 'n' sew, trial and error method. 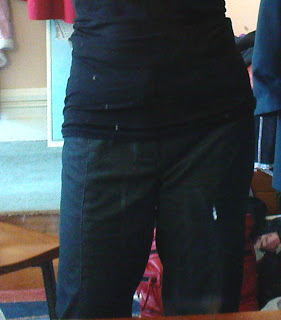 Posted by Violet at Thursday, November 11, 2010 2 comments: Links to this post