Today I went down to Parliament to support World Animal Protection in their stand for the Maui dolphins (of which there are only abut 50 left, from memory).

I walked down from work taking the usual path, which takes me onto the lawn via Parliament's carpark. In the distance I spotted a small group of folks holding placards, so I walked straight up to them.

Then I stopped because their placards all had the name "Julian Assange" them. Obviously there were two protests outside Parliament today.

So I tapped one of them on the shoulder asked where the dolphin protest was. That protester waved his hand over to another small group of folks holding placards, just on the other side of the steps. "It's a bit like the People's Front of Judea, isn't it?" I called out jokingly. They got the reference, because another one of them shouted in reply "I'm an individual!!".

The second lot of protesters seemed pleased to see me. They were only perhaps 5 people with placards to spare. They invited me to grab one that was lying on the grass and I did.

Then I noticed my placard had the word "methane" on it."Funny", I thought. "what's methane got to do with saving the dolphins from terrible fishing practices?". That's when I realised I was at a small climate change protest. How awkward. I apologised guiltily and asked them where the dolphin protest was. They pointed to a small group of people gathered quite a long way away, on the far side of the Parliament lawn.

And that's where I went.

Posted by Violet at Tuesday, November 05, 2019 No comments: Links to this post

We are finally starting to see signs of summer. And in  summer I like to have the back door open as much as possible (along with the windows).

It's for the cooling breeze, the circulation of fresh air, and our way of opening up the house to the outdoors ( because we have no ranch sliders or decking).

But there's a wee grey cat in the neighbourhood  that likes to run inside the house and make itself comfy. Fortunately its friendly enough that we can remove her without risk to life and limb. But it's a pain to have to do this. It wouldn't be a problem if I weren't allergic to cats.

Anyway I have found a solution in the box that the boy's latest toy came in. I'm using it as a cat barrier... 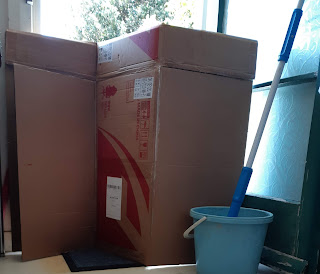 In which TLM wins a school prize

We had not planned to go to TLMs school prizegiving, unless she was getting a prize. As far as we knew, she wasn't getting one. And TLM was pleased to get most of the day off school on rehearsal day.

Then, I got a text from TLM with - teary eye emoji - saying that actually she did won a prize and wouldnt get that day off after all.

So of course I was motivated to attend the school prize giving  now. I was even wondering whether I would draw disapproving looks if I whooped it up when her name got called out.

But in the end we could not get tickets to attend, because this year the venue that was not to large enough to accommodate the parents of all the prize winners.

Then I had the teary eye emoji...😥

It was only after I arrived to pick TLM up to bring her home (at 10pm!!) that I found out what the prize was for - science 😊.
Posted by Violet at Sunday, November 03, 2019 2 comments: Links to this post