Holiday weekends wait for no virus - and beware of errant undies

TLM is getting over her second cold of the month - normally for her a cold is done and dusted within a few days with maybe two days off school, but this time around she stayed home for the 4 days before Easter and has only just started easing off on the nasal dribblings.

After demolishing three boxes of tissues and about 5 loo rolls I was worried that there'd be nothing left of our grocery budget by the time she's done.

Then I got her cold, which was also my second cold of the month. (Though lately my colds don't manifestly nasally; it's more a case of terrible headaches and brain fuzz followed by wheezing and coughing. )

But dammit, I'd already booked for our accommodation in Ohakune and would lose my deposit if we cancelled - so we went.

It went swimmingly well actually. TLM, newly introduced to reusable tissues (that is, handkerchiefs),   kept her snots under control and the boy and I didn't feel the urge to pluck dried snots that were stuck on TLM's septum. My own cold has been arrested and I put it down to finishing a whole bottle of lemon, honey and manuka syrup over three days. We went for forest walks, played board games and relaxed with the friends we were holidaying with.

We stayed at the Top Ten Holiday Park there, in a kitchen cabin. That means your cabin has a kitchen (as well as beds, a bedroom and a tv) but you have to use the communal bathroom. Normally it wouldn't appeal but their communal bathroom is actually pretty nice and the showers are amazing.

The only problem with external bathrooms is that when I go there to have a shower I always forget to bring all of the clothes I want to change into post-shower; and I always forget to bring a bag for the dirty clothes. So when I got dressed after my shower I had to tuck my unclean undies into the waistband of my leggings (so I wouldn't have to be seen clutching them in my hands).

Of course I forgot to remove said undies after returning to our cabin - and only remembered after we'd packed all our stuff into the car, the boy had started the car and I was trying to sit down and put my seat belt on.
Posted by Violet at Monday, March 28, 2016 No comments: Links to this post

Why I enjoy having a swan plant 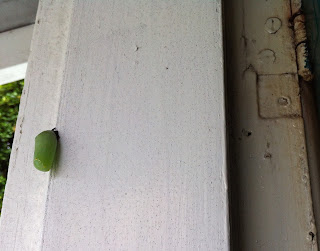 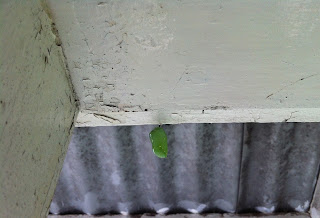 They came, they ate, they chrysalized on our back door frame, and then they emerged and fluttered away.
Posted by Violet at Sunday, March 13, 2016 2 comments: Links to this post

I made a top out of hexagons 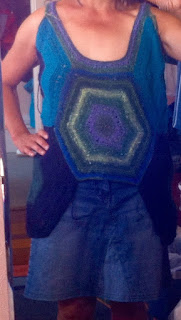 In any case I'll have to wait for it to get a lot colder as this is made of wool. I plan to wear it over long sleeve tops. Whether I do so out of the house or not will just have to wait until then...

I bet you want to make one too now. Have a look on my Ravelry page for details.

Posted by Violet at Sunday, March 13, 2016 No comments: Links to this post

The lemon that looked like a pair of boobs

Our lemon tree is chock full of small, ripe lemons (due to lack of proper pruning) so I got out my secateurs, gruntingly shifted the rubbish bin over so I could use it to get some height, and harvested me some organic lemons.


It was the boy who found this one, amusing shaped like a pair of breasts nipples and all. 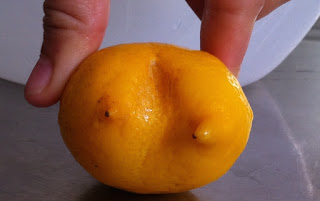 If you hold it points-up, it takes on a mildly devilish appearance ("devil's dumplings!"- a Blackadder reference) 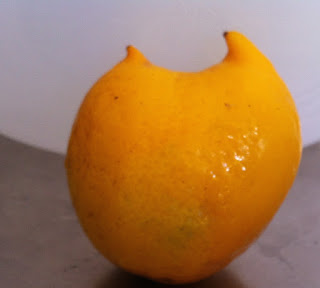 But this lemon's odd form could not save it from becoming lemonade.

Posted by Violet at Sunday, March 13, 2016 No comments: Links to this post