One of the fabrics I bought in Hong Kong was a lovely shirt cotton with purple pinstripes. I traced a pattern from the Stylish Dress Book by Yoshiko Tsukiori - View D Button-up blouse in Liberty print. 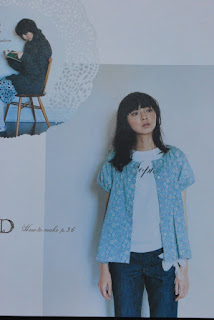 I traced the size 14 based on the bust measurements. I am in between size 12 and size 14 for this book and probably closer to a 12. However after making it up I think maybe I should have made a 10... 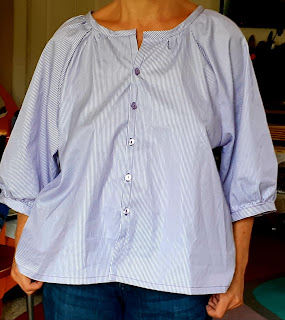 But even if I had gone with a size 10 the sleeves would still have been waaaay too long.

I'm still going to wear it, if I can figure a way to style it.
Posted by Violet at Sunday, January 27, 2019 2 comments: Links to this post

A couple of with trees ago I made some jeans using a Mcalls pattern and some stiff non-stretch denim. The fit is really off though so I didn't wear them much.
So I turned them into a summer shoulder bag. 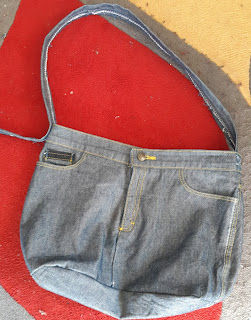 I inserted 4 additional inside pockets, including a zipped pocket rescued from TLMs old school backpack.  There is still no satisfactory bag closure tho, nor for the outside pockets.
Posted by Violet at Sunday, January 06, 2019 1 comment: Links to this post

We came back to hot weather but my bung ankle has prevented me from going for walks or to the beach. Instead I started sewing and made this simple linen maxi dress.

I added side pockets and trimmed it in change at bias binding. Also inserted bias bound godet-like pieces at the lower sides.

From the photo I ca
Posted by Violet at Friday, January 04, 2019 2 comments: Links to this post

It's harder to be green in Hong Kong

Yes they recycle. Yes they have recycling bins.
But we often could not find one when we needed one.

Also, it is hard work avoiding the plastic. When we bought takeaway dim sum it came in polystyrene and plastic bags, along with plastic cutlery. Yeah we could have brought our own reuseables, but I didn't want to buy any. So instead we mainly ate in (when we weren't having lovely lunches or dinners with my aunt).

It is also really really hard not to eat meat in Hong Kong. I knew there is a vegetarian eatery in Mong Kok, but I never managed to go there. And all the relatives are meat eaters - so I decided we would just go with the flow rather than make nuisances of ourselves when eating socially. Usually when eating out there is just one vegetable dish on offer - and it's cooked with meat. (Though I will add the food is delicious.)

Though I was pleased to be able to avoid partaking in the shark fin soup, it was unfortunate that this dish was on the menu.

In Taipei, the plastic thing is slightly better in that there is collection of used cardboard. But the main great green thing about Taipei is that you can get great vegetarian and vegan food there (but there are plenty of meat eaters so vegetarian isn't a default option). We had great vegetables and great fake meat (made of tofu), our favourites of the latter being the fake kung pow chicken the the fake sweet and sour pork.
Posted by Violet at Wednesday, January 02, 2019 3 comments: Links to this post

Our other leg of the trip took us to Taipei to visit our friend. Because we would be staying with her, it was just for a few days, and I knew we would want respite from sightseeing after a very busy week and a half in Kowloon - I didn't bother to get a map of the place before we went. I did get a book out  of the library and make notes about places to see and things to do though.

It turned out to be a week of food. Our friend does not do walks, so despite living at the edge of national park we didn't get to go there. But we did get to sample a large variety of north-Chinese influenced foods (including dim sum and spicy pork schnitzel); wonderful tropical fruits; and smashing frozen desserts.


On day 3 in Taipei I forgot to look where I was going and sprained my ankle going down some stairs at the National Palace Museum (about ten minutes after going in). I was totally bummed out at missing seeing the contents of the museum but the staff were great about wheeling me off to the infirmary, packing ice around the ankle and so on.

However my ankle was still not up to scratch for the long flights home, so we arranged for wheelchairs and assistance. Wow - flying is a breeze when you are a special needs passenger... 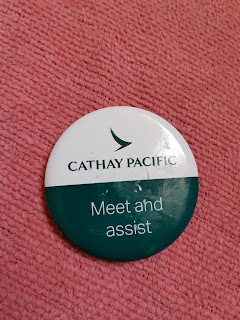 I read an article about the Kowloon Walled City before we left for Hong Kong, and I was fascinated by the idea of a lawless, super-crowded city that was still going strong when I was doing my OE (it was only demolished and replaced by a lovely Chinese garden in the early 1990s, and it's now called Kowloon Walled City Park).

Days after we left there I continued to be utterly fascinated by this place when it was a bustling mini-metropolis full of people trying to live away from the prying eyes of government officials. There's a book about this place called City of Darkness but it seems to cost around $US200 per copy so I can only hope there's a copy at the public library...

There's some good information about the city and about the book. This is the best site I found.
Posted by Violet at Wednesday, January 02, 2019 No comments: Links to this post

We went to Tai O, a village on the island of Lantau which is famous for it's houses on stilts. Hong Kong's airport, their Disneyland and a whole lot of designer shops are also on this island - but on the opposite end of the island. So Tai O still feels remote.

Apparently a fire in 2000 destroyed many of those houses, so there aren't so many in the traditional design. 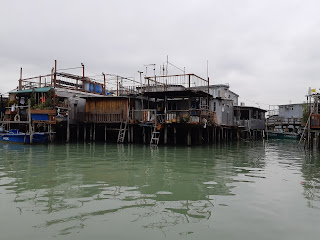 Wong Tai Sin is a big temple complex north east of Shamshuipo. I remember going there with my mum, my bother and my aunt.

It's popular with people wanting to get their fortunes told, and that time the fortune teller told me not to try to have everything my brother has because he is older and bigger than me. I think my mother might have taken that to heart...

This time around I didn't bother with the fortune telling as I wasn't sure my Cantonese is good enough to understand the answer. But we did enjoy the personifications of the 12 Chinese astrological signs, and the lovely Chinese garden that apparently wasn't there last time. 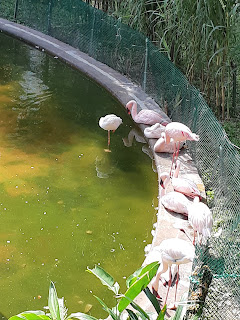 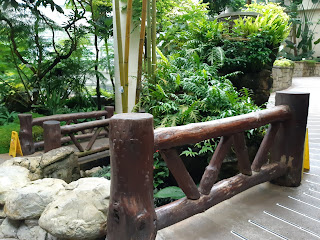 We went to visit a tomb from the Han era. It's in Shek Kip Mei I think. The tomb itself was interesting-ish but the really interesting bit was the exhibition about Hong Kong's earliest government housing. My mum and her siblings lived in one of these - shared a tiny apartment with other families; there was one bathroom shared by all occupants of one level; and some families lived in the corridors.

We went on to visit the last remaining of these buildings, which is now a (pricey) youth hostel with a museum section. This had mock ups of the apartments, as they were originally and over the decades.

My aunt lived in an apartment like this when I first visited as an 8-year-old. The trauma of my experience of a squat toilet at her place has never left me!

When I find the photo of the kitchen I'll add it here.
Posted by Violet at Wednesday, January 02, 2019 No comments: Links to this post

We went to Ocean Park. It's a lot more over-the-top Disneyland-like than it was last time I was there (about 30 years ago!), but the aquarium is still a fantastic way to see marine life. 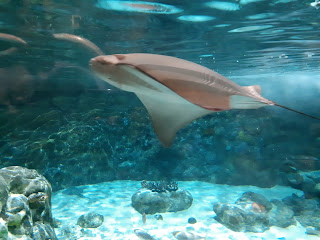 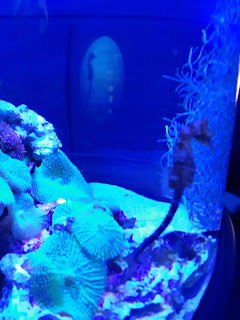 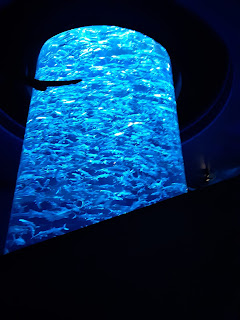 Happy New Year!
TLM and I just arrived back from visiting our Hong Kong relatives and a dear friend in Taipei. We had a great time, ate lots and saw lots - but it is soooo good to be home again.

Just so you know, I'm not going to be posting about our rellies and friend here, since I don't do the personal blog thing. This is strictly a travel series.

Have a look at our hotel room in Shamshuipo (Kowloon) -


Yes it was a piddlingly small hotel room - but it was very clean and located really close to the airport bus; fabric shops; Apliu Street flea market; the quirky fashion shops of Cheung Sha Wan and many small eateries. It was also quite close to Shamushuipo MTR station, which is on a central line.

Also, the reception staff a helpful and there is a social space occupying one level of the hotel which is handy for hanging out in the afternoons and evenings while the cleaners are working on your room or for meeting friends. The one thing that would have improved our stay immensely would have been a fridge.

My brother and his family had been in Hong Kong for a week already, and due to fly out a few days later. One of our joint activities was walking around the flower market and the bird garden,


Posted by Violet at Wednesday, January 02, 2019 No comments: Links to this post