I always find myself watching Border Patrol on the telly, which is an Australian reality show about the Customs people in an Aussie airport. They are the folks whose job is to scan the bleary-eyed people who've just come off a long-haul flight and pick out the suspicious-looking ones.

For some reason, most of these people are Asian and the rest seem to be Middle-Eastern. Now, I would be the first to admit that the occasional homesick Asian will try to smuggle in an illegal taste of home in their strangely lumpy luggage.

But white folks aren't all innocent you know - like, Schappelle Corby was white and she got caught with a load of drugs in her surfing bag. Though that was in Bali. Maybe the Balinese think all white people look suspicious and the Australians think that all Asians and Middle-Easterners look suspicious.

It seems to me that certain races are being targeted just because they aren't white.
Or is the stereotypical goody-two-shoes Asian just a big fat myth?
Posted by Violet at Monday, June 25, 2012 1 comment: Links to this post

The Kathmandu chain is having yet another one of its big sales, and since we've been suffering galeforce southerlies, icy rains and 7C air temperatures (that's without the wind chill factor), the shop was extremely busy today - I'm talking queues for the changing rooms and queues at the checkout counter.

The boy wanted to buy TLM some leggings (I haven't been buying them myself, because she is always falling over and putting holes in the knees. Instead, I've been patching them). We did - TLM also ended up with a jacket to add to her impressive collection, as well as matching top and bottoms thermals and some woolly socks.

Then the boy went and bought himself a few things.

All the while, I was thinking that I've knitted various items to keep my family warm - yet they still prefer to buy factory made. I staunchly avoided buying anything for myself (until I got to the Warehouse, where they were selling merino tops $39 for two  - that's cheap for NZ) because I've been knitting steadily to increase my wardrobe of handknitted winter clothing.

Oh well. I can't expect other people to appreciate my efforts as much as I do.
Posted by Violet at Saturday, June 16, 2012 2 comments: Links to this post

TLM had her first Pippins over-nighter on the weekend - we dropped her off at the designated Girl Guides location at 2pm on Saturday and didn't go back to get her until 1pm the following day.

I spent the afternoon with my good friend who was visiting from Taiwan; we drank coffee, ate cake and talked about our respective obsessions (her - tap dancing, me - knitting and TLM).

Then the boy and I went out for tea at our usual pre-movie eating place (The Hog's Breath) and went to the movies.

I was tossing up between Prometheus and The Avengers - the former because it's by Ridley Scott (I loved Alien and Bladerunner), the latter because it's by Joss Wheden (who is god). Basically, the movie I chose was the first movie I could find on the Internet which was definitely being screened in 2D rather than 3D. I am one of those unfortunate folk with unequal vision, who get headaches after using 3D vision glasses.

As for Prometheus? Well, I enjoyed it. It was a space horror with a feisty heroine, a spooky atmosphere and a totally unnecessary reference to the evolution vs Creationism argument. As far as I'm concerned, there's no argument, so why can't we just treat the possibility that humans were created by super-humans as just another speculation? Why does the plot have to serve as a Creationist manifesto? If you ask me, there's an awful lot of unnecessary religious references in science fiction. But I did enjoy the movie. Though maybe we should have gone for the Joss instead.

When we went to get TLM on Sunday, she announced that she didn't like overnighters - and that the highlight was the cheese.
Posted by Violet at Tuesday, June 12, 2012 2 comments: Links to this post 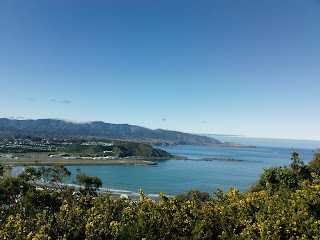 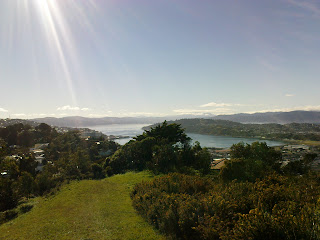 New Zealand is really far away from most of the rest of the world. But it's really pretty when the sun comes out. These views are only a few minutes away from my house. 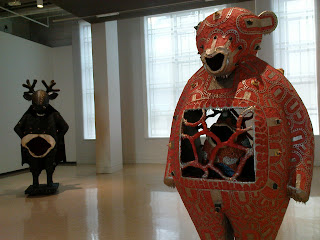 Posted by Violet at Tuesday, June 05, 2012 No comments: Links to this post

I want you to know that, even though I've had a terrible cold since just before the long weekend, I still donned my Union Jack singlet yesterday (with a merino shirt underneath). And I'm wearing it again today.

I like to think that this is my way of acknowledging the Queen's official birthday and jubilee, though mostly it's I just like to wear it because it's a souvenir of our Easter holiday in the UK. (And just in case the boy's dad is reading thing - I also wear the Union Jack t-shirt which you gave me, but will probably have to let TLM have it because she really likes it).

Next weekend TLM  will be going on her first Pippins overnighter. I was filled in her consent form yesterday and wasn't sure what to put in the space they've given to for any medical conditions they need to know about. Should I write that she sometimes has cramps in her tummy but they'll go away if she has a poo?
Posted by Violet at Tuesday, June 05, 2012 1 comment: Links to this post