I've been wearing this pullover quite a lot - surprisingly I quite like the pistachio colour and high neckline (one good thing that has come out of my hair loss and subsequent pixie regrowth is that high necklines actually look okay on me now).

The yarn is a cotton and acrylic blend I got on sale at KnitWorld. 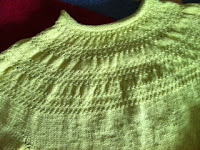 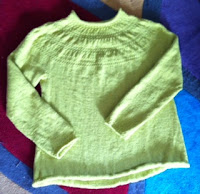 The pattern is called Keynote Pullover, by Mary Lou Egan. I can't recall the name of the book - Easy Knits, Simple Knits or Quick Knits - something like that. Boring title, very knittable designs.

I have been thinking I should be knitting with organic fibres, but knitting yarns are expensive enough as it is. My next knitting project will be from an unraveled cotton/acrylic cardigan I made two summers ago that I never wore. Even if I can't do organic at least I can do re-purposed :-)
Posted by Violet at Saturday, April 28, 2018 No comments: Links to this post

This is the skirt I made during the sewing meet-up I went to a while back. The boy gave me a pair of his jeans which had a nice fade on it but was well ripped in the knees, plus a pair of navy blue twill (rather than denim) jeans.
I cut up both pairs and flipped them upside down so that the pants' hems form the waist of the skirt, while the skirt hem is from the crotch of the pants - giving me some swishy shape.

The navy pants were used mostly to form side pieces, which I pleated up until the total width around the waist felt about right to me. Then I add a D-ring and strap (from The Little Madam's old school backpack which I cut up) so the skirt would stay up. A red jeans zip that I bought cheaply from a furnishing's shop was added to help with the closure but in the end is just decorative.

I added one of the jeans pockets (the other I had inadvertently cut through), plus a pocket I sewed up out of the navy. Once I'd sewed them down with two  lines of topstitching I realised they were too low and close together to be front pockets. So that side is now the back!

The end result is just above ankle length - a little too short to wear with sneakers but still wearable, especially with boots.

I haven't been back since, only because of a lack of suitable sewing project and/or it was going to be too nice a day to spend indoors. But if the timing is right I may get to the next one with a Tamarack jacket.

Posted by Violet at Friday, April 27, 2018 No comments: Links to this post