Today was, of course, the day of the world premiere of The Hobbit. It was a big day for us because we don't get a lot of those around here, nor the celebrities who appear at them (unless you include occasional cast members from Shortland Street.

Yes, there's been the odd sighting of Martin Freeman or Andy Serkus in the last few months (apparently), but they aren't exactly a familiar sight - unless you work at the New World supermarket just down the road from the Stone Street film studio. So it's still a thrill to glimpse a famous face in person.

I wouldn't have minded being there today, up against the barriers protecting the red carpet and the beautiful people who trod on it - except I would have had to camp there overnight to get a good spot (i.e. with a view not blocked by tall people with big hair and loud friends) and have extreme patience and a really strong bladder or some friends to mind my spot while I sought the nearest servicios (that's toilets, if you've watched Dora the Explorer).

But as soon as I found out that there was a statue of three giant trolls displayed down that way, I resolved to walk down there in my lunch break to see it. I did wonder whether it would be too crowded, that I would ended up under some sweaty tourist armpit.

But I went anyway, just for a look-see. The first thing I noticed was how many young people there were. It's not like the city usually looks like a really big retirement home or anything, but there were a LOT of young people. More than I have ever noticed in one place before (well, since my last live rock concert). Maybe it's just because everyone seems young these days 'cos I'm older...

Anyway it wasn't that crowded as there were still a few hours to go until the start of the celebrity runway.

Those trolls are great! Their skins look real and leathery, and even have hairs poking out. I didn't take any photos though because it just seemed a bit uncool when everyone else is doing it. You can check out what they looked like on the link about half way back.

Posted by Violet at Thursday, November 29, 2012 4 comments: Links to this post

On my late introduction to skinny jeans

(Actually, it's quite hard to find jeans which aren't skinny legged.)

I went and bought myself a couple of pairs of skinny capris, in white and lilac. They're capris, but on me they are a perfect ankle length.

Anyways, when I wore them with similar-toned longish tops, I was quite (mentally) comfortable. After a few more wears, it now feels weird when I wear wider-legged jeans. It feels like there's too much fabric flapping around. Funny what you get used to.

The other thing is that with the skinnies, the fabric (which is firm, but soft), wraps itself snugly around my legs and it kinda feels like they are keeping the flabby bits from moving around too much - hence, a feeling of skinniness.

At last, I get why women, even those of unmodel-like proportions, have been wearing them for the last few years. All you need is a top that covers your un-perky bum and enough concentration to walk around without sticking it out too much.

...though they aren't so much fun in hot weather. I may have to look for some linen trousers once summer gets under way.
Posted by Violet at Thursday, November 22, 2012 1 comment: Links to this post

When TLM had a temperature on Tuesday I was worried she'd caught the "strep" that seems to be going around her school. But we never heard back after the doctor took a tonsil swab, so it must have been a virus after all.

Two days off school did the trick though, and she made it to Brownie camp after all.

The boy and I were full of ideas on how we would spend our child-free weekend.

Then my head started to hurt and my forehead felt hot...

Still, we managed to spend Saturday doing the sorts of things we used to do pre-TLM. And that turned out to be mostly the same kinds of things we did post-TLM.  We went out to lunch, read freshly-bought magazines, went shopping, rented a DVD...

A bit of a yawn compared to, say, dinner at a flash restaurant followed by movie or theatre. It was all I could manage, but even if I were well it would not have been a bad day at all.

The boy went to retrieve TLM this afternoon, and she was full of stories about what they got up to (archery! orienteering! making stuff out of bits of paper! learning the song "Found a peanut"!)

But when I later asked her what her favourite part of the weekend was, she said it was "eating cornflakes".
Posted by Violet at Sunday, November 18, 2012 No comments: Links to this post 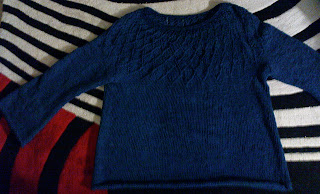 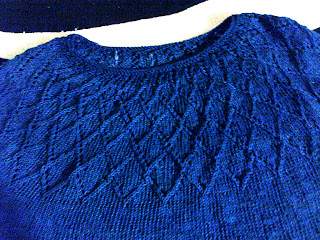 I knitted this out of some Rowan Denim yarn which is 100% shrinkable cotton. It really really grows - to start with the hem came down to about mid-hip on me. If I don't machine wash and machine dry it soon, it will be knee length...
More details are on my Ravelry page
Posted by Violet at Saturday, November 03, 2012 2 comments: Links to this post

The boy brought home a bunch of peonies the other day - the petals were in tight little bigs. 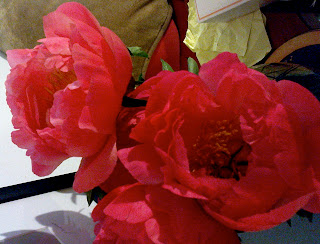 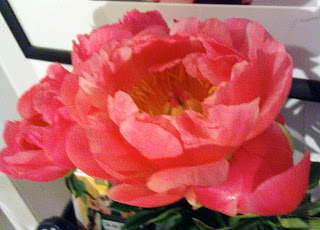 Then they bloomed.
They've since transformed into face-sized, papery-yellow blooms.
It's a bit like have different flowers.
Posted by Violet at Saturday, November 03, 2012 No comments: Links to this post