At long last, something finished...

I was off sick on Friday, soon after I started sneezing so hard it left bite marks on my tongue (there were definitely a few times when I just about decked myself on a nearby table or kitchen bench).

There was a small window of opportunity to sew before I began coughing so ferociously I nearly asked the boy to go out and buy me a pack of Tena Ladys. And in that time I finished the shell top that I made from the boy's old pair of faded summer jeans.

But I will have to wait for the next window of opportunity before taking a to post up on this blog. (And it will probably be next summer before I will get to wear it.)

One thing I have learned is that, if I have a chance to re-design something that I sew, my approach to it is much like how I used to approach my painting. I do it in fits and starts, with lots of thinking and re-thinking (and sometimes re-doing) in between. Sewing like this is much more fun than picking something easy and just following the instructions, but it sure does make the project take an awfully long time.

Anyway, something for you to look forward to eh?
Posted by Violet at Sunday, June 28, 2009 7 comments: Links to this post

Bug of the month

It turns out that my co-worker did not have the swine flu after all, just a bad cold. If that's the case, then a whole week's quarantine has not stopped the rest of the office from getting it - and now it's my turn.

It seems I get sick with something every month. And I've still got my bum-sized elbow too (though it's almost fixed now).
Posted by Violet at Thursday, June 25, 2009 4 comments: Links to this post

An elbow the size of a bum

On Thursday evening I noticed a pimple on my right elbow. The boy joked about my having teenage elbows as I squeezed the pimple, careful not to aim it at either him or TLM.

On Thursday night I noticed that the area around my elbow was pink and tender. In bed, I couldn't lie on that side because it hurt my arm.

On Friday morning it had swelled up and felt like someone had lit a small fire under it.

Then I went to the doctor's, got a double dose of antibiotics and now it's normal size again. But it's still just the right temperature for a pocket warmer.

When my brother and I were kids, we used to watch Kung Fu - you know, that American tv show that starred a bald white man as a Chinese martial arts hero. It didn't bother us too much that it wasn't a Chinese actor in that part, and any historical inaccuracies went right over our naive little heads.

But when the boy and I watched The Mummy - the tomb of the Dragon Emperor, I was bothered.

It wasn't because the Chinese characters were played by non-Chinese pretenders, because - as far as I could tell - they weren't (though they may well have slipped a few Japanese, Koreans etc in there and I'd be none the wiser).

It wasn't because the story was all about a bunch of unwelcomed white folks saving the Chinese (and the rest of the world, presumably) from themselves.

It wasn't even because young Alex, the grown-up son of Rick and Evy, hooks up romantically with a mysterious young Chinese woman who will probably be utterly unmarriageable after he's dumped her (and he will - he's a young white man from the 20th Century).

It was because the film is set in a specific time and place that is frankly not a very pride-worthy piece of Anglo-Chinese history. It's after the Second World War and before the Communist takeover (okay, there's a really huge chunk of Chinese history that is not particularly pride-worthy), and China is basically owned by the English, the Americans and the French. Shanghai is beautiful and glamorous, but the nice bits are closed to the locals, who are mentioned in the same breath as dogs. Many scenes are set in a Shanghai nightclub; it's filled with foreigners and the few Chinese are probably "escorts".

Despite the lightness of the plot, the special effects and the relief that Alex's mother actually looks old enough to have a 20 year old son (Maria Bello, who took the part because Rachel Weiz knew she was - and looked - far too young), this film was not so fun for me.

I wonder what the Egyptians thought of the first Mummy movies.
Posted by Violet at Tuesday, June 16, 2009 5 comments: Links to this post

I never know what to get the boy for his birthday, which is why I always ask him. And if he does tell me, and it's something I can get him, then he kinda expects another - surprise - present as well. Well this time, he decided it would be nice to send TLM off to the relatives for the night so that we could have one-on-one time with no pressure to get up early in the morning.

We expected that TLM would be all for it. And we expected she'd be really excited about it and possibly not actually sleep at all. I really didn't expect that she'd let me go without at least a little cry of insecurity. But she seemed really okay with me leaving - maybe because she and her beloved cousins were busy making up her blow-up bed, and possibly planning midnight mayhem.

I'm just about to go pick her up now, and then I'll know how much sleep she got.
BTW, I got the boy a Wii Fit. I think he liked it.
Posted by Violet at Sunday, June 14, 2009 6 comments: Links to this post

Is swine flu the piggies' revenge for their horrific treatment in battery farms?

We had a little of excitement at work today, when the big boss rounded us all up for an emergency staff meeting. One of my colleagues is off sick with suspected swine flu!

To be honest, I'm not at all convinced the poor woman has it. She sounded like she had a minor cold, and probably it was only her recent trip to Australia that alerted the folks at the medical centre. I hope she doesn't have it because she's pregnant and I wouldn't want her baby to be traumatised in utero.

But on the other hand, the prospect of being quarantined at home for a whole week - on full pay, I'd expect - is not exactly going to give me nightmares tonight. I wouldn't expect the pox to make me any sicker than that month-long cold I had not long ago. And the boy and TLM wouldn't have to stay at home with me - they'd get their Tamiflu and take off to the library or the shops or something, leaving me lots and lots of lovely sewing time...

I think maybe I could do with a holiday.
Posted by Violet at Thursday, June 11, 2009 4 comments: Links to this post

Rubbish is smelly when it's not encased in plastic

So I was at the supermarket with my mum, and I was toting 4 of those reusable grocery bags with me. And my mum asks me why I don't want the (still) free plastic bags that they give you at the checkout. So I try to explain to her that the world already has too many plastic bags clogging it's oceans and filling the landfills. And that is why the boy and I use the reusables.

But what do you use for holding your rubbish? she asks.

Um...the old supermarket bags that we still have from previous shopping trips, I tell her.
Well, if you've got so many then you can give me some. I have lots of rubbish and not enough rubbish bags.

And then I remember that we are actually running low on those very instuments of planetary destruction. And what will we do when we run out? Why, we'll leave our reusable bags at home on our next trip to the supermarket, that's what. Because we sure as hell don't want to start paying for rubbish bags, do we?

So...does this make us namby-pamby play-at-eco-awareness semi-lefty hypocrits?
Posted by Violet at Monday, June 08, 2009 6 comments: Links to this post

Labels: the stuggle for greenness

I have had no luck finding "gems" in the op shops. The stuff in the Salvation Army shop is mostly ex-Glassons and other retailers that specialise in the cheap 'n' cheerful. The stuff in the Red Cross shop is more of the same (though I did once find a Robyn Mathieson dress that was, unfortunately, a terrible colour for me).

And yet, bloggers across America seem to unearth vintage pillowcases, antique lacy bridal gowns and 60's retro fabrics all the time - and for very little.

Either I'm just terribly bad at snagging bargains (which, I'll admit, I am), or New Zealanders tend to hang onto their stuff for as long as possible - before selling it off on TradeMe. If our car-owning culture is anything to go by (i.e. we hang onto a car until the bodies fall apart from rust, and them try to flog it off to a student for a few hundred bucks), then this is an equally likely explanation.

I think I prefer the latter.
Posted by Violet at Sunday, June 07, 2009 7 comments: Links to this post

I was reading the Sunday paper this morning, in between dropping my mum off at church and waiting for her to finish up, when I came across the dumbest newspaper article I've seen in at least a week.

The article was called something like "What will you do when the recession ends?" The dumb thing was not even the question.

The dumb thing was that, they must have asked about 20 different people this question - but no one of them was someone who has been directly affected by the recession. Like, why the heck didn't they bother asking someone who'd be laid off recently?!
Posted by Violet at Sunday, June 07, 2009 3 comments: Links to this post 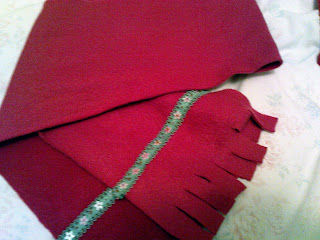 I found out about a discount fabric place just out of the central city, so I spent a couple of Queen's Birthday hours looking around there. Fortunately, TLM was quite happy to accompany me, even though there was absolutely no promise of Dora fabrics (there weren't any). She even went around giving cuddles to lucky rolls of fleece and silkys. She was very keen indeed on the costume section, and at one point I worried that I would end up buying a length of sparkly sequinned stuff for goodness knows what.
It's probably not surprising that I ended up spending far more than I intended to, but I did get quite a few items:
- 3 x 2m lengths of knit (including one of merino), from which I intend to sew at least 3 winter tops
- some white cotton and interfacing, for collars for the two refashions I am still procrastinating over (the bogan shell top and the mens shirt -->women's top)
- a bag crammed with trims of all sorts, which ought to be handy for all kinds of TLM-related sewing
- and a length of pink polar fleece for TLM's scarf.

We made the scarf that afternoon, based on some instructions I found in a library copy of Sew What! - Fleece. We cut a piece of the pink polar fleece, cut tassles into each end and hand-sewed some sequinned, pale green trim at each end. TLM chose both the fleece colour and the trim.

I think she liked it. At the very least, she doesn't have an excuse to wear my scarves now.
Posted by Violet at Tuesday, June 02, 2009 3 comments: Links to this post